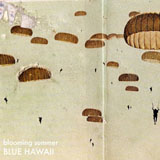 In an interview with Lookout earlier this summer, Blue Hawaii describe the tone of their debut EP as “really tropical and really lush and watery,” which is pretty much exactly what you’d expect an album called Blooming Summer by a band called Blue Hawaii to sound like. Those names evoke saccharine cocktails and Elvis in a yellow lei, and they paint a picture of a project defined by nostalgic yearning—all of which positions them squarely beside this year’s trendiest blooming summer record, Best Coast’s Crazy For You. Except that Blue Hawaii are resolutely not, despite what every contextual detail surrounding this release would suggest, a chillwave band. Because while Crazy For You shirks emotional responsibility as a protective measure against earnest vulnerability, employing carefree summer imagery as a kind of coolly distant spectacle, Blooming Summer remembers the past fondly, even romantically, as an only temporary reprieve from the pain of right now. Whereas Crazy For You is grounded in a shallow melancholy, in a vague hurt and longing for the past that amounts to little more than a wistful rut, Blooming Summer‘s hurt seems rooted in something deeper. If this is chillwave, it’s chillwave reappropriated as a vehicle not for empty nostalgia but palpable heartbreak—a constant ache that seems amplified by how gorgeously it’s being rendered.

There’s something almost Lynchian about the approach: it’s pain, clear only on close inspection, raging just beneath a veneer of too-perfect beauty. In Blue Velvet, and to an even greater degree in Twin Peaks, Lynch used the conventions of traditional Hollywood cinema and television to tap into a much deeper sort of emotional and psychological truth, and the results resonated more than a more straight-forwardly “realistic” approach would have. Here the blissful, carefree summer stuff and the typical chillwave synth sounds that surround it serve a similar function: on “Belize,” Raph signs of side-by-side beach walking and feeling great “delight,” but there are undertones of something less pleasant. When her final call of “delight” fades, engulfed by waves of reverb, a sharp drum crack brings us out of it: that summer is over, Belize is many miles distant, Montreal is getting cold.

Raph’s vocals are nothing short of extraordinary. This is pained, moving stuff, but a great deal of its resonance is owed to the delivery of lines which in less capable hands might have fallen flat. Here things get Lynchian once again: like Julee Cruise, whose similarly ethereal singing can elevate already astounding television to a state of dreamlike wonder, Raph’s voice, at a few crucial moments, connects with you in a way that you have to hear to believe. Blooming Summer steers clear of chillwave’s go-to crutches like irony and cynicism anyway, but given the power of Raph’s voice I don’t think this could have been a off-handed trend project even if they wanted to sound distant and uncaring. Album opener “Lilac” sounds great from the start, and Raph’s cries of “true love” are nothing if not gorgeous, but only during the song’s last minute, when she reaches unbelievable highs with the words “in my head” do you realize Blue Hawaii’s capacity for greatness. The world spins, the Giant talks, Donna cries, and we all just sit there stunned.

These elements could not come together more perfectly than on “Blue Gowns,” Blooming Summer‘s best track and the most heartbreaking song I’ve heard this year. Here Raph sings of poor decisions and wasted affection with a mixture of obscured jealousy and despairing regret, the combination of which her voice makes sound more painful than a gunshot through the ribcage. We’ve all imagined ex-lovers in the arms of new ones, but has there ever been a more eloquently ugly description of the daydream than “I think about you thrusting into her”? And when she asks, without a wink, “how stupid could we get?”, you can hear the screamed cursing, the bleeding and broken-down insides, the regrettable finality of things, in her voice. Again, the beauty of this stuff on the surface, the perfect care with which this album was crafted, transmits more pain and hurt and anger and sadness than shitgaze or chillwave or anything else could have. You can go to the beach, but your problems are going with you. How fucking sad is that?