Other Records by Boards of Canada 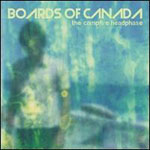 As inevitable as it was, the coming wave of global warming still comes as a shock when we begin to see the actual results. Polar ice caps are melting, water levels rising all across the world, and the hurricane season this year seems to be getting pretty close to message-from-God status. There are good things to come of this, though, and the most surprising may be that the brothers Sandison--better known as Boards of Canada--have finally cheered up. Scotland is a forbidding and cold little chunk of land, but after a few years of light winters and more sun than average, it’s hard to blame the Sandisons for starting to look more on the bright side of life. The result is The Campfire Headphase, which, while perhaps not a great record, is still both wonderfully consistent and blissfully chilled out.

Campfire Headphase is BoC’s most organic-feeling album to date, using more subtle washes of sound, light keyboards, and even unprocessed guitars. There are still backbeats thrown in, but not with the regularity that they did on Music Has the Right to Children or Geogaddi. Much as I have always loved the former record (and only listened to the latter fleetingly), I’ve always been somewhat put off by the manic feel of many of the songs. The second, calmer half of Music is probably the best point of reference for Campfire (think “Pete Standing Alone” or “Smokes Quality”); the problem is that while Music managed to capture a full spectrum, Campfire is left playing out this one angle, and it doesn’t really hold up all that well for a full hour.

Where BoC do nail the formula particularly well, they manage to pull together tracks that can rival the highs off of either of their previous albums. “Chromakey Dreamcoat” rides off a progression of flat guitar notes, letting the Sandisons build up and strip away increasingly complex beat patterns. It’s almost an exercise in beat building, but they manage to make it work as a song, giving it that sepia-tone finish their best work has achieved.

The real standouts come a few songs down the line, with the killer one-two punch of “Peacock Tail” and “Dayvan Cowboy.” Both build on more or less the same formula: build up a quiet, acoustic first half, and then blow it open later in the song. On “Peacock Tail,” BoC bring in the simple beat early, letting the song slowly build through a beautiful keyboard line and rising chorus of back-ground noise. It’s an almost unconscious process, and by the time you hit 3:18 it feels perfectly normal for the beat to have tripled in size and complexity, with the background noise fracturing off and spiraling around the song. “Dayvan Cowboy” is even better, as BoC build the huge shimmering first two minutes of the song, pulling it all up for the guitar strum at 2:07 and then letting the orchestra and the beat hit right at the same time (2:42). None of the elements are over-powering, but again it just feels perfectly natural for all of this to be happening at once and throwing itself into that unstoppable melody in the second half of the track.

BoC don’t seem to really be able to keep up that energy and creative stamina for the entire record, and once you spend a few tracks twiddling with your synthesizers it can be tough to win the audience back. As much fun as “Oscar Sees Through the Red Eye” and “Ataronchronon” are, the band follows them up with the almost comatose “Hey Saturday Sun.” “Constants are Changing” is the most beautiful minute and 42 seconds of music here, just leaving you desperate for more, but the next track, “Slow This Bird Down,” drags on for about three minutes too long.

Eventually it just comes down to whether or not you have the patience for Campfire. This record isn’t gonna kick you in the head the way that BoC’s last two outings have on occasion done. The break beats aren’t gonna blow you away and there’s nothing here that’ll really get your blood rushing. If you give it the time, though, Campfire reveals itself as an truly beautiful piece of work, better produced and with a tighter sense of melody than the Sandisons have shown in past. It can get slow at moments, but there’s a lot hidden in there that’s worth the wait.