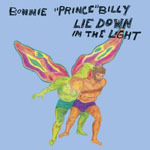 Lie Down In The Light

For most Oldham fans, it’s always been enough to get a new batch of songs, even if it’s in the same vein as the one directly preceding less than a year before; as the Bonnie Billy moniker has grown further and familiarly away from the glacial Palace tides that endeared Drag City to the Oldhams in the first place, Will’s obsessions with sin, dread, and self-immolation have only ebbed back to roll outward, revisited over and over as a constant and consistent recontextualizing of Oldham the “anti-folk” figurehead or Bonnie “Prince” Billy as the wandering hobo heart of Amurrica. His moves have only ever been comfortable strides, never that risky, just assured, refined touches that have turned BPB from forced sad-sack character into wonderful caricature, allowing the nuances of Oldham’s artistic identity to stretch past solipsism into something totally accessible. Which is why Lie Down In The Light is so easy to like, why Oldham will never really eek his way out of the darling niche he’s inhabited forever, and why his R. Kelly cover is just as melodically lifting as his Milton Nascimento. The guy’s a natural.

So Will Oldham’s punctually made this nothing-new, not-so-much album, comfortably dropped somewhere between the affected grace of The Letting Go (2006) and the freedom inherent in Sings Greatest Palace Music (2004; itself at odds with its own straight-laced Americana, making country-western standards out of a devoted canon of gothic folk). Turns out I love it, dearly, for its big, sweeping platitudes, for just its broad lyrics, lazy grammar and dopey diction, its unadorned everything. I adore its casual glances and fellatio, its whimsical alignment of worship with licentiousness, its praise songs forgiving the past sins of the tracklist. I like how supple and worn it seems, the goosebumps on Oldham’s tongue, Oldham’s tongue at the throat of the microphone. I love that this is a straightforward Bonnie “Prince” Billy record, satisfied by the most predictable ambience, attitude, and tone to ever really shake out of Oldham’s camp. I love how satisfied it seems and that nowhere is it really hungry for anything more.

Maybe that’s underselling him. Right: “pleasant” fucks him, stunts his growth, narrows that grand artistic scope. Retreads are shameful; your obligation is showing, yeah? But Lie Down In the Light is just that, an unrelenting that, and not much more, utterly okay with that. At the least it’s a moving panegyric to folk and country tropes, steeped in croaky acoustic strings and grinning open chords, Bonnie “Prince” Billy sidling closer to his influences. At the most it’s a wholly successful denouement, Billy widening the breadth of his “solo” band, pushing, softly, a communal warmth where once there was mostly self-absorption. That “Easy Does It” can build meticulously—Oldham’s voice stronger than ever, his register challenging the fiddle’s place in the mix only so a piano can plop in and ping the gasping coos way behind—and still dance around a loosey-goosey aura is a far cry from the anvils of black that introduced Bonnie “Prince” Billy ten years ago. Think I See A Darkness (1999) with a home to return to after scouring some lover’s buttocks. No more romantic despair, just the romance of an artist confirmed, utilitarian simplicity hand-in-hand with solid family values, fully functional. Yippee!

The tracks, then, aren’t myth-making or dabbed with picaresque episodes. (How far from a Tom Waits paean was I See A Darkness really?) And that’s totally cool; a little pretty harmony goes a long way, especially dipped in the honey of a clarinet. In fact, it may do some injustice to the songs to parse out their joints and describe the innards, but tracks like “Every Field Has A Mole” and “Missing One” (a gorgeous bit of longing exclaimed in the basest of dynamics) vaunt into transcendent moments almost incidentally; the humid porch is abandoned for a smoky jazz club or a pallid winter sky. Flight, could be said, is the trying theme at hand: how to battle that urge, be consoled by the ground, plant something seasonal and lasting. The album’s core, the magnanimous “You Want That Picture,” perches a pedal steel over Ashley Webber’s lap, pinning her to Oldham’s coy excuses about fleeing his domesticated love. Instead of dwelling in regret or lonely organ, the song gathers to eulogize, “It’s alright / And everything comes down to this / Everything there every was or will be / Is all there is,” something of a triumph in its stupid and loving omniview. The way the song finds its resolve, transforming dependence into a religious ecstasy, is so effortless—that the album ends on a note of praise, intoning something along the lines of that “Footprints” poem, should be no surprise. Oldham’s content with his newfound, mundane awe.

No shocking directions or paroxysmal about-faces, but Lie Down In The Light is still some glorious stuff, expectations met and mettle once again tested. It’s difficult to imagine the artist’s next step, what with his career arc so clear and round hereabouts, but not much of that really matters as long as Oldham’s presence, forever indie and loudly compulsive, maintains such startling suction. He’s a man of epilogues, methinks, of spin-offs and serial tangents, and, really, that eclecticism is rumbling tummy enough.