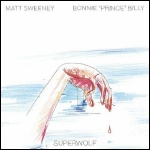 I remember hearing Will Oldham's Viva Last Blues for the first time. It’s not as hard as it ought to be, seeing as how it wasn’t as long ago as it ought to have been, but I remember that I was instantly unimpressed. There didn’t seem to be much about this wailing, off-key, heavily bearded, lunatic preacher that struck my fancy. “New Partner” was unquestionably great, but there was always the mountain-fucking and hard work and play. The basic moral of the story is not that I’m an idiot (arguable), but that there are certain records that reveal themselves slowly; Viva is now one of my five favorite records, and I listen to it more than any other album in my collection.

Will Oldham, the mad-genius behind Palace Music/Brothers/etc., known wide and far as Bonnie "Prince" Billy, has only made albums as tough to crack, though. Sure, some of the earlier Palace albums are hard listens at first, but his second Work Of Genius, I See a Darkness, was far more immediate, even if it also grows manically from there. His latest work, Bonnie “Prince” Billy Sings Greatest Palace Music seemingly started as an attempt to make some of his earlier material a bit more listener-friendly, but ended up being more divisive than helpful (likely the actual aim of the project).

The main point that arises out of this is that Superwolf--the Oldham-penned, Matt Sweeney-orchestrated collaborative album--is probably being reviewed far too soon. Give this a couple years, at least six months, and see if you’re still listening to it. Maybe it turns out that the guitar heroics and classic Oldham feel of “My Home is the Sea” passes with time, though I doubt it. Perhaps the unbelievable “Blood Embrace” gets stale after fifty listens, but if so I’m going to be eating my words. Hell, it’s quite possible that a glaring flaw will emerge with Superwolf, but I’ve been listening to it for almost a month, and so far it has not.

Superwolf is Bonnie-era Oldham trying to channel Palace-era Oldham. The aesthetic is seriously stripped down; Matt Sweeney seems to have been trying to channel a Viva-type sound for this record, just with the guitar work a fair bit more complex (Sweeney was responsible for matching music to Oldham’s lyrics), and overall he seems to succeed. Opener “My Home is the Sea” is the best we’ve heard from Oldham since Darkness, complete with rocketing guitars and his usual great, imagery-laden lyrics. The hushed and beautiful “Beast for Thee” is a great follow-up, with plenty more Oldham poetics going on. “What are You?” is a bit to similar to "Beast," but the themes of spanking (gotta have at least one weird sexual song--it is an Oldham album after all) and the call of, “You say I am evil / You know that I am stupid / I don’t appear given / And I don’t appear lucid,” sold me on the track.

“Goat and Ram” is weaker than the preceding cuts; it's loaded a bit heavy with Oldham’s spirituality, and the huge central climax feels a little too Greatest Palace Music. Sweeney and Oldham come back strong with “Lift us Up,” which is great until it hits the goofy center bit about the “creature form of superwolf.” The whole thing strikes me as a Napoleon Dynamite-esque creature on par with the liger.

Still, after this brief detour (which, even at its worse, puts most of his contemporaries to shame) we get the slow, sprawling “Rudy Foolish” (this one is begging for a Califone cover) and the beautiful “Bed is for Sleeping.” The latter reminds the young freak-folkers that the master can still write pop gems that make even Devendra Banhart’s “At the Hop” sound pretty harmless and slight. “Only Someone Running” and “Death in the Sea” keep the streak going, the former with a plucked, quiet spiritual love song and the latter a beautifully orchestrated reflection on death.

And then there is “Blood Embrace:” at eight minutes, this is easily one of Oldham’s longest and, though this is saying a lot, one of his darkest. A massive, brooding (yet passive) reflection on betrayal and control from the standpoint of the man who has been betrayed, this is classic Oldham. Hearing him come to the conclusion that he is indeed absolutely controlled by his unfaithful lover is chilling: “Does she test me / Does she know / That I would never turn and go / But fight another / If that’s what she had me do.” The sample in the song is perfect, and lends it an even darker air of age and mystery. Superwolf then finishes with the ornate “I Gave You,” a lovely tale of wasted love and rejection that serves as a good closer for such a dark album (much like "Raining in Darling" had been for Darkness).

We’ll see what I think of this album in six months, but for now I’m thoroughly impressed. I can never tell with Oldham, but there seems to be the weight of emotion behind his writing, not to mention Sweeney’s apposite garnishes, that has marked his best work. It’s far too early to say, but I don’t think it would be too far-fetched to see Superwolf as an equivalent to Days in the Wake, Joya, or even the massively underrated Ease Down the Road: not his best work, but certainly not a disappointment or even cause for alarm. Superwolf is the sort of album that should keep the critics and the fans happy until Oldham changes moniker and spits out another masterpiece. It’s only a matter of time.