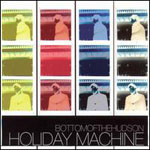 Bottom of the Hudson

Bottom of the Hudson are fairly content to fit the mid-fi indie rock bill: Eli Simon’s weary plain-man’s vocals mesh easily and melancholically with his unrushed, fuzzed, jangly arrangements. His comfort within the indie rock genre doesn’t manifest itself in particularly lazy songs, but neither does it result in particularly ambitious music.

“Conjecture Means” only moves outside of a basic two-note alternation thanks to Simon’s vocal melody, the urgency of which still fails to elevate it beyond mediocrity. “Candyman” is an exercise in basic melody, poorer lyrics than Simon seems otherwise capable of, and remotely interesting electronics.

But Simon can hit some relative highs, “Riot Act” and “Is it a Crime?” being the two notables on this relatively brief EP. “Is it a Crime?” pulls out some semi-glorious synths for its thick chorus, resulting in an unexpected beautiful surge in the midst of four basic melodic notes cloaked in heavy fuzz. The delicacy of “Riot Act”’s opening passage, which eventually gains weight and heart with a pulsing rhythm, is something to marvel at, with its beautiful errant piano keys wandering in between plucked guitar strings. And it carries one of the few remarkable chorus melodies on Holiday Machine.

It’s a shame that these brighter moments have dull, merely passable material to accompany them, because they might tempt one to say that Bottom of the Hudson have some serious forward looking potential. Unfortunately, they're basically what most indie rock tends to be: somewhat plain, with a couple pretty features.