1. Be Gentle With Me
2. Fur Soft As Fur
3. Monsters
4. Papercuts
5. Warm Panda Cola
6. I See Spiders When I Close My Eyes
7. I’m Glad I Hitched My Apple Wagon To Your Star
8. The Battle of the Boy Least Likely To
9. Sleeping With a Gun Under My Pillow
10. Hugging My Grudge
11. My Tiger My Heart
12. God Takes Care of the Little Things 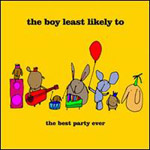 The Boy Least Likely To

The Best Party Ever

Who knew that heartbreak could be so much fun? Paranoia and self-loathing: boy howdy, let’s get some banjo and chimes in here. “I’ve got nothing to worry about so I worry about nothing”; sounds anxious. Much like a saccharine harmonica could sound? Cheekiness and sunshine!

Needless to say, the ever-building twee canon (not to be confused with the weapon used during the Civil War by the more flimsy soldiers) has another entry in UK sensitivos, The Boy Least Likely To. This, their debut album --- “their” being singer Jof and dude Pete- --- is a lollipop conflagration of grinning banjos and obligatory Beach Boys sunshine, spiking from the cinders of otherwise debilitating relationship woes.

This is nothing necessarily new, as pop forebears and shambling modern cutesies alike can testify to grounding the whimsy of such sugar in relative emotional heft, but The Best Party Ever, a collection of three singles and five new tracks, doesn’t let up. As the LP draws to the end of its brief twelve tracks, the closing duo of “My Tiger My Heart” and tiny “God Takes Care of the Little Things” outline a morose crawl into adulthood where infatuation and unadulterated love seem to be pieces of a less mature past. Jof coos about moving on, trusting the urge to let go of childish whatnots, and as goddamned painful as it can sound, the breezy recorder that sidles into silence is just that. Breezy.

Remarkably, the harsh realities of losing childhood glee, manifested in lonely revolvers under sleeping heads and cobwebs clinging to irises, grant a solid frame to the album’s bombastic arrangements. “Be Gentle With Me,” as fantastic an opener as any confectioner could hope for, establishes requisite acoustic strumming and banjo plucking for the rest of the tracks, gouging glockenspiel with fragile pleas for innocent playground interactions. “Fur Soft As Fur” follows, building upon the heap of happy instrumentation introduced in the first track with a Sufjan-y violin and simply charming harmonies. Even so, the persistence of insect imagery and brisk, wintry pain claws at the smooth sandbar of handclaps and snare running in and out of the mix. Is that a theremin? And it’s not cloying? Cheers!

Even “Monsters,” a gothic distillation of most tracks preceding and proceeding it, carries a deliberately marching melody, moving on the rails of a splendidly multitracked vocal line, but ultimately proves to rip its impish incognito in two with sideways glances at the shadows of grimacing creatures. Jof ruminates, “How happy I could be if I could just be more like them.” Further on, the bass line behind “I See Spiders When I Close My Eyes,” normally hindered in most of the album, wanders out to assure the listener that not all is lovely.

What keeps these dainty pop pieces from becoming enveloped by their own windy “bah-bahs” and incessantly shuffling acoustic guitar is a fat, dirty yearning and some strong nostalgia. Frankly, Jof isn’t a great lyricist, and his bloody sleeves seem too sopping wet at points (“Papercuts,” a synthtastic goofest, is particularly quaint and heartbroken). Frankly, the glockenspiel and cosmic falsetto of TBLLT’s verses grow tiring and unexciting much too quickly. Frankly, I went into diabetic shock after hearing “I’m Glad I Hitched My Apple Wagon To Your Star.” But, despite these staples, these intrinsically twee bubbles, The Best Party Ever is thick and thoughtful, never too spacey to resign to twinkling white noise.

Admittedly, the sad hues of The Boy Least Likely To’s music does little to encourage the frantic joy implicit in its chimes and childish sweetness apart from encouraging general escape in any borderline adult. Maybe the Party hasn’t started yet. Maybe we’re just not ready to let go. It’s a delicate subject. Let’s wait until the alcohol gets here.