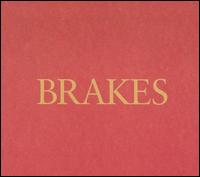 Let’s get one thing straight: Brakes don’t like you. First they’re gonna spit on you, then they’ll make fun of the music you like, scuff your shoes a little bit, co-opt any and every genre and cliché they can get ahold of, and then tell you to fuck off. So yeah, Give Blood is a fantastic album.

But how could it not be? It’s 16 songs over the course of 28 minutes in which the other guy from British Sea Power (Eamon Hamilton) alternately croons and swears in a southern accent and basically plays off everything from punk to alt-country. It’s completely ridiculous, free-wheeling, drugged off its ass; like Art Brut if they were a little less clever and a fair bit meaner.

It’s not that these songs aren’t consistently funny; it’s more that they just take a target and destroy. “NY Pie” takes dead aim at the rich kids with its fantastic chorus of “oh, oh, get me a pony.” The devastatingly bitter “Heard About Your Band” could almost be aimed at Art Brut, with its mocking name-checking and firmly set sneer. The 10-second scream of “Cheney” and the 38-second “Hi How Are You” provide perhaps the most memorable minute of screaming anger this year.

The real trick these guys have down is their ability to mimic and subtly mock the genres of the moment. “I Can’t Stand to Stand Beside You” pokes fun at any number of recent nervy post-punk bands, while “Pink up the Phone” could well be a shot across Mark E. Smith’s bow. The DFA are dead center for the dead-on moronics of “All Night Disco Party.” Still, it’s the combo of “You’re so Pretty” and “Jackson” that really nails it. The band is in full-on slide guitar twang as Hamilton plays it all inbred South Carolina. If it weren’t for the ridiculous lyrics, these songs could be coming off the next Ryan Adams disc.

It’s hard to tell if this disc will have much in the way of staying power (yeah, haven’t really thrown on Bang Bang Rock & Roll in the last couple months), but it’s a hell of a fun listen. At the very least it goes to show, once again, how wonderfully vicious a Brit with a sense of humor can be.