1. Everything That’s Grey
2. Digging the Fault Line
3. I Think I’m Falling In Love
4. Only Time
5. And Had We Ever…
6. When the World Stops Turning
7. Love is Burning Down Tonight [mp3]
8. Good Morning Sunshine
9. This Sea, These Waves
10. More Than Everything 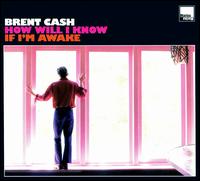 How Will I Know If I'm Awake?

If Brent Cash’s vision of 1960s California pop might seem to unfold like a Hallmark card, look behind the sugared glaze and vintage sanctioned-for-Ed Sullivan lyrics to see a space where, as the opening track suggests, everything is grey. With a couple of exceptions, the tracks here are unrelentingly ebullient on the surface; what’s interesting is the way Cash precisely employs 1960s vocal harmonies and arrangements to whittle away and isolate his own voice, impacting the meaning of seemingly throwaway and vague lines to suggest all is not quite the sunshine that burns off this album. Imagine how Brian Wilson felt, pre-Pet Sounds (1966), slap-happying his way through “California Girls,” and you have an idea of how Cash manages to emphasize the pop and the veneer; “I Think I’m Falling In Love” cements the dichotomy by clearly suggesting that California, as lovable as it is, is haunting too.

Which is not to suggest this necessarily sounds like the Beach Boys, either. This is somewhere in a nexus of that group, Scott Walker, the Byrds, and Gram Parsons/Emmylou Harris, all gussied up in a wash of gorgeous instrumentation stolen from Burt Bacharach. It’s hard to emphasize how brilliantly Cash apes and re-articulates these influences; this isn’t some update, or some attempt to revision his idols. This is a strict attempt to produce music from a genre that, while incredibly influential on today’s music, is rarely produced anymore. If Caribou had done this with his own attempt to recreate psych outside of his own innovations, I would have been far happier.

That said, Cash is so precise in how he renders this material that it can seem like an exercise in Lego construction—the clarinet flourish from this track, the flute line from that, the horn crecendo from this other one, and: “Good Morning Sunshine.” Now slow it down for the final verse. While monster tracks like the gorgeous “Love is Burning Down Tonight,” “When the World Stops Turning,” “Only Time,” and “Digging the Fault Line” defy criticism based on their composition, the exhaustive nature of the album’s project tends to suggest that Cash wanted to hit every base he could.

That’s meant to be mild criticism. It’s more that there are songs here that I wouldn’t be too interested in listening to outside the context of this album than it is that Cash has made some bad songs. As an album, the attraction is undeniable, a stupid-grin inducing orgasm of cultural-nostalgia spinning out across the surface of an ambitious project that takes the sometimes ludicrous gravitas of this kind of music seriously enough to make it work. Cash even has the gumption to end the album with a song about closure, salvation, and Bacharachian piano riffs. It’s both groan-inducing and clever; “More Than Everything” is a really pretty song that ends a sunshine pop album exactly how sunshine pop albums end, but then you realize that all of this stuff about credits rolling and skies and “answers from on high” are about death. So, there you go: Cash has neatly and subversively employed some of the most notoriously chipper arrangements of contemporary music’s short history to make an album about losing everything and dying. Except: this is still a blast to play at parties.