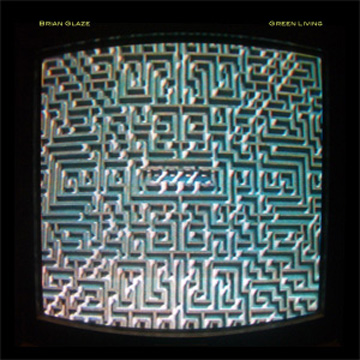 Hi, Brian Jonestown Massacre! I love you to death; I love you even when, truth told, I don’t keep up with the indie world nearly as well as I should (I still have no clue what a Harlem Shake sounds like, and, if we were to go back to the sacred cows here, I really don’t care much for Drive Like Jehu). I even loved last year’s My Bloody Underground, and apparently was the only one who felt that way about the admittedly haphazard (but creatively on-fire) collection. Point being, I’m devoted enough to BJM that I’ll check out anything associated with its large radius of connected acts and former members. Enter Brian Glaze: a promo package arrives, and the only relevant piece of information to be divined is that this singer-songwriter played the drums of debut BJM masterpiece Methadrone (1995). Anyone who pounded skins on “That Girl Suicide” and “She’s Gone” deserves a listen, even if the record is him playing the flute while shitting into a bag (actually, from my point of view, especially if that’s what it is).

No bag-shitting here, nor bed-shitting; yes, Green Living is a collection of home recordings, and that always raises a few flags considering “home recordings” is often the title given to an ersatz dumping ground disguised as sincerity. Granted, the lo-fi messiness and clear, guy-alone-at-_his_-place desperation of some of these recordings was at first off-putting — I don’t have anything overtly against someone like Ariel Pink, but the “tape hiss is my copilot” conceit just often wears plain thin for me; proves to be shallow given no real conceptual heft — but in the case of Green Living, the fuzz and throaty shadows blanket Brian Glaze’s set of biting downers with something of a theme.

It’s easy to imagine the setup for the recording of these tracks; let’s start with one of the best cuts here, “Highway Ribbon”: It’s late on a Friday or Saturday night, there’s a TV showing some kind of cult movies about a hero on a fast machine. Said hero is hitting the town in style. Back to the room—the clock strikes one in the morning and Brian Glaze sets down his umpteenth cig of the night in the overfilled ashtray, starts jiggling the cable into the distortion peddle. It only works if you have the cable bent right at ten o’clock (or maybe it’s two o’clock?) and, ah, there it goes. Cue a scratchy, simple drum track to join, then conjoin, these tired, disparate bits of intimacy, and this decidedly unglamorous man makes his own Friday night good times. The snares crackle, there’s plenty of tambourine to go around, the keyboards are dreamy, and the guitars crunch under Glaze’s mean strokes. In this imagining one can connect with the overall, say, sensation Glaze is exploiting his shit-sound for: songs like “Highway Ribbon” exist solely in a creative moment—fuck what time it is, run outside and let somebody on this earth know what you’ve just accomplished. Dwell in immediacy, even if that makes no logical sense.

Frankly, it would almost be detrimental to the impact of a record like Green Living if all the cuts were home-runs, so of course there’re some songs that don’t communicate with the larger whole as well as “Ribbon.” “Killing Time” is heavy with the specter of BJM’s Anton Newcombe, but it ultimately becomes stifling, as though Glaze is forcing his hand away from his desired target and from the greater flow of the album. “Bad News” does the same BJM-esque run much better, sounding like the best song that didn’t make it to Newcombe’s confessional Thank God For Mental Illness (1996). Still, these blemishes form the imperfect face of Green Living, and, oddly, elucidate an unexpected depth to the record, bringing a certain creative process to light and making it, in total, a more compelling document.

The last thing worth noting about Green Living—other than that it’ll adhere to your ears in a way few other seemingly bedroom pop records will this year—is that Glaze includes some expertly written AM-radio-type ditties. Opener “Leader Of The Band,” deceptively upbeat with its sonic mud and rudimentary drum machine loop, tells a tale perhaps harking back to the BJM days. See, she wants to get the leader of the band, specifically, and that’s with whom she ends up. Is this sad? Glaze doesn’t appear to come away empty-handed. Perhaps that’s the takeaway from Green Living: Glaze isn’t surrounded by hype and friends and popularity, but his loner songs are far more wrapped in satisfaction and understood inspiration than most angst-ridden entries into similar almost-b-side territory. Green Living has cult status written all over it, and what’s even better is Glaze isn’t trying hard to tailor it that way.