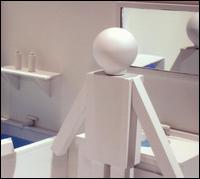 I met Joel Petersen, the man behind Broken Spindles, at a show in Cleveland a couple of months ago that, at the time, I thought was well worth that six dollar parking ticket I got. I was blown away by the conceptual projections that fit perfectly with the music, even as it was performed live. The show told the story of a man’s day with lots of esoteric quirks, such as a painting of Abraham Lincoln, a black man, and a Native American signing a treaty hanging on the wall behind a man and his colleagues as they made a business deal.

After the show, I wanted to tell Petersen that he was a fucking genius, and I did just that. The conversation was pretty standard. You know, what programs do you use, where are you from, etc. (Cakewalk, Omaha respectively). At the time, I wasn’t aware that the sardonic mullet on this man’s head belonged to the founding member and bassist of Omaha’s The Faint. If I knew that this was the Joel Petersen from the band with that cool video (“Agenda Suicide”), but no good songs, I probably wouldn’t have talked to him, much less bought his album. But I did. (Note to self: Stop throwing the word “genius” around).

Broken Spindles started out by doing a soundtrack to a friend’s film in 2001. There were no lyrics before Fulfilled: Complete, and 2002’s self-titled release was downright good because of it. Fulfilled: Complete would have been at least as good, if not better than the first release it the lyrics weren’t there to ruin it. It has more than enough moments to make it a solid album, had Joel Petersen stayed with instrumental electroclash. It’s just that the lyrics are god-awful strands of post-teen angst monotonously spoken with the rhythm. Okay, I get it, Joel’s a little bit gothic, a little spastic, and not very poetic, but Jesus, what the hell is this? “Will you fall in and down on to your knees/ Bruising the caps and where your spine used to be/ Bend your neck at least 45 degrees.” Has he been reading some sixteen-year-old gothic girl’s notebook or something?

The best song you’ll hear on Fulfilled: Complete is “Induction,” which is sad because most of the album after that is wasted potential. While “Induction” is an ethereal introduction to the album, there are more driving dance songs like “Move Away” and “Events & Affairs.” There are also more spastic songs such as “Italian Wardrobe,” an example of Broken Spindles’ potential electroclash prowess. But it’s over soon, and you’re left with functionless crap for the rest of the album’s 32:55 duration, which seems like an eternity unless you’re not really paying attention to it.

So the moral of the story is: don’t get too excited when you’re at a show. Take it from me. I loved Broken Spindles live, and in the end, all I got was a parking ticket and another CD to add to the crap shelf.