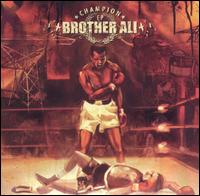 There’s a reason why Atmosphere’s “Cats Van Bags” was the first vinyl single from Seven’s Travels (2003). Brother Ali ripping over ANT’s shocking Bomb Squadesque production was the intended mitigation of Slug’s looming “LL for Art Fucks” reputation. Radio got one of the many girlie songs, but the DJ ’s got “Holy shit, who’s this new guy Slug’s rapping with?!” Unfortunately, Ali was not to fill Spawn’s absence (but did anyone really notice?) and the DJ's quickly followed up: “Holy shit, he’s not on any of the other tracks on the album.” Shadows on the Sun (2004) then doubled its sales, and ANT decided that maybe, just maybe, it was time to pull out the beats he’d been saving for a day with a cloudy atmosphere.

Limb-walking: Brother Ali is the most infectiously-moralled, in-your-face audible hip hop “presence” since Nas was semi-conscious on Illmatic (1994) and that’s how he managed to score the most polished MPC 2000 gems in ANT’s catalogue for this release. I promise that not once will you blink forcefully in an eardrum hell resulting from a mistweaked ANT snare on this record. Indeed, the novelty with Champion is that the current- best emcee (“potential” being a wholly different matter) on RSE’s roster actually gets paired with in-house producer ANT’s best beatwork to date. It looks like today is also going to be the day that the Sebutones reunite and talks start for a Deep Puddle reunion.

“Champion (remix)” recalls the Mecca and the Soul Brother (1992) days when Pete Rock was renowned as the King horn-digger in hip hop. It does so by using the very best ragga trumpet section that Pete never found. Blaxploited soul reigns over layered Jamaican funk while Ali reinvigorates the battle winners from one of Shadows’ more lyric-heavy/beat-light tracks. This is death to the lazy remix, an improvement by miles over anything on the previous long-player, and raw energy at 466 kbps. Worth 100 replays.

“Bad Ma Fucka” rickrubins harder than Jay Z’s “99 Problems” without the $250k/beat price tag. Ali’s trademark rhyme-or-die attitude gets highlighted (“You don’t understand me / I don’t have a plan B / I don’t have a mom and dad to help me land on my feet”) and somehow manages to out-strut the punishing drums, almost-indaudible gut-tickling low-end, and Tommy Lee cocky metal guitar riff. Ali stacks bricks of ego on the track while a (Bob Dylan-ripped!) harmonica struggles to add a touch of mortality to the superhuman effort. The overdubs are so precise that the vocals earn a nervous quality--the listener becomes paranoid, afraid of being gored by a 250lb rap dude with pink skin and red eyes. “Bad Mah Fucka” is the ideal show-opener, and likely the token jam that the Good Charlotte dudes begged to play live on during the Warped Tour (and also the reason why the Good Charlotte dudes would have got black eyes during the Warped Tour).

On “Love on Display,” ANT samples motion. The prickly strings from “Liquid Swords” are given a downhome barbecue feel over a charismatic Kanye’d soul vocal. The percussion thuds on the low end and tap dances on the highs. The track takes on an impenetrably dense feel and leaves just enough room for Ali to squeeze in a chorusless one-breather. The highlight: “Imagine what a trip it is rapping for little shits who think that DJing was created by Mr. Dibbs / Thing of it is those are the main ones that show us support, so I owe my existence to them, ‘n shit." This is Ali-light, and it still hits you in the chest while back-kicking a heel in the ribs of the teen-ran hip hop industry.

Finally, “Chain Link” plays like a reverse “Juicy." ANT’s Mtume-like descending synths and pulsating bassline are sprinkled with high strums and another perfect soul vocal. Ali tells tales of the hardworking, honest Muslims in his community and contrasts their resilience in learning a foreign language in order to barely survive on convenience store wages with his sordid temptation to make a quick buck selling drugs. The underdogs are glorified, the flaws of society’s exalted are revealed by comparison, and a jagged religious pill gets coated with a sweet funk soul loop and a rare humble perspective.

“Hands Down” is the best of the rest, and plays “Big Poppa” to “Chain Link’s” “Juicy” as Ali spins a convincing sex-rap with the blatant gusto of Eiht’s “Can I Kill It?” ANT’s single-sample soul loops tire quickly on “Self Taught” and “Rain Water," and “Waheedah’s Hands’” disastrous hook features a key-shift in the bass melody but not in Ali’s sing-song delivery, thereby disjointing the entire effort.

On the recent MF Doom remix of Non-Prophets’ “Damage,” Ali quips: “Must not discuss divorce with the case still pending, but / I got some shit to tell you on my next record." The frightening part is not that quality like this is found on an in-between full-lengths EP release; the frightening part is that Ali sounds like he’s just now coming into his most personal, passionate material. I’ll be following ANT around record shops while I wait.