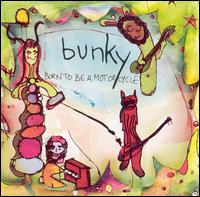 Born to be a Motorcycle

As I enter my early 20s, I find myself increasingly crotchety. I can still enjoy silly, goofy music, but it's starting to seem less and less poignant. Architecture in Helsinki are fun, but I just can't take it seriously enough to love their records. Of Montreal are a good listen occasionally, but, again, the twee can sometimes be too much. Even some of Blur’s earlier, more carefree moments strike me as painful. Why listen to “Boys & Girls” when there’s “This is a Low?"

This all sets me up to hate Bunky’s debut record, Born to be a Motorcycle. But I don’t. It’s actually quite a lot of fun, perhaps signaling a young band who could do quite well for themselves in coming years. Still, there’s a song titled “Gotta Pee,” so you can only take the highbrow approach so far.

The basic Bunky formula consists of simple rhyming lyrics delivered by Emily Joyce (with whose voice I have no complaints), aggressive drumming, horns, synthesizer, and catchy guitar lines. A few times they pull it off quite well. Opener “Baba” is a full-force intro to the band, with driving horns matching Joyce’s propulsive drum line. “Yes/No” is the best thing here, as Rafter Roberts, the other half of the band, takes the mic and gives a wonderfully sly delivery. Joyce provides good backing vocals, and the band clearly has the basic laws of handclaps down.

From there, things get a bit iffy. “Funny Like the Moon” is an impressive showcase of Joyce’s vocal range, but the song never really delivers as much as you’d hope it would. “Gotta Pee” is fun and has a good pop sensibility, but again, it feels like the band is playing with third-grade level rhyme schemes. “Boy/Girl” is just sort of grating, “Chuy” is pretty bland and “Glass of Water” could have benefited from some more lyrics (the bizarre circus feel is intriguing). “Heartbunk” gives Joyce another chance to show off her impressive voice, and it’s a touching song, in a strange sort of way.

The real anomalies here are “Lipstick Life” and “Cute Not Beautiful,” where the band seems to be aiming for a Yo La Tengo feel. That they manage to capture a bit of it is admirable, and the two songs are both actually pretty interesting, but they don’t quite fit the album. If Born to be a Motorcycle is any indication, and if their live show is as good as advertised, Bunky could have great things in store. Asthmatic Kittty has been picking winners lately, and if Joyce and Roberts manage to write themselves a few more compelling lyrics, they'll finally be able to use their musical chops to pull off some interesting material. All the same, if you’re looking for a saccharine pop fix, this spring’s offerings from AiH and Of Montreal both trump Bunky.