1. Remote Control
2. Dinosaurs [Stream]
3. Municipal Monarchs
4. General Electric vs The Imperial Moth
5. Everything You Believe In Is a Lie
6. Grave Situation Pt. 1 [Stream]
7. I Guess I’ll Be Seeing You
8. Happy Birthday To the End of the World
9. Grave Situation Pt. 2
10. In the Palms of Your Hands
11. The Second Cigarette
12. What Do You Get for the Man Who Has Nothing? [Stream]
13. Goodbye Ukulele 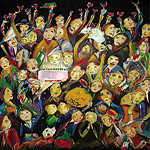 Amid the rumbling underbrush of trumpets, above the shuffle and stomp of an unidentifiable number of feet, and beneath the freewheeling sing-a-long, the cabaret is much more a celebration of the macabre than it is of the life and love against which darkness is so eerily contrasted. So much more a celebration of the murkier aspects of our existence, actually, that it casts life’s travails as an absurdity dependent on the omnipresence of death’s deep-penetrating creep. Death needs life to snuff out, and that’s nature unquestionable and unquestioning. But life tries to understand the joke of how, in light of death, it can justify itself.

So it should say something to note that the Burning Hell are positively teeming with life. A collective in the truer sense of the word than a Kevin Drew byline, any given night produces a different number of participants (fifteen contributors are listed in the liner notes of Happy Birthday), often ballooning fundamental structures to sprawl with big band accoutrements. A ukulele or acoustic runs near-silent beneath the Burning Hell’s various horns, strings and keys, capable of (and, as evidenced by the lovely “Goodbye Ukulele” and “The Second Cigarette” perhaps better off) standing alone, but each addition is tantamount to a sense that the absurdist’s epiphany is one propped up by a large consensus.

Where the Burning Hell ultimately hinges and sways is the Magnetic Fields baritone of singer Mathias Kom, who accommodates his band’s tendency towards the carnivalesque in the style of Tom Waits with a thrumming, purring gait. His project can stray dangerously close to the Crash Test Dummies’ territory for its humor, especially with lines like “here’s to all the dinosaurs that play guitar in dingy bars and hotels / you never made the cover of a Rolling Stone / but you cover Rolling Stones songs very well” or, on the campy, Eels-lite of “Grave Situation Pt. 1”, which are all very cute, and have a charm far more translatable live than on CD. But if humor isn’t as lasting, it can still have a greater initial impact and is harder to pull off, and it’s here that the Burning Hell stalk the halls of a broad and accessible contrast. For every “Grave Situation Pt. 1”, and its accompanying glance sideways at mock innocence, there’s the mortality of “Everything You Believe Is a Lie” (not unlike the Eels “It’s a Motherfucker”) or “Happy Birthday to the End of the World,” which outbursts into a full-bodied band at its end to dance on the embers of the treasures it’s watched burn.

Kom and company stop short of catharsis, and Happy Birthday can feel like a crescendo without release, but there’s a daintiness that’s both difficult to achieve with so many voices and a literate lyricism that speaks to the dependence of such performative camp and knowing kitsch on not only a strong sense of humor, but a perspective much broader than that afforded many outlets of festival philosophy. Tom Waits is an intimidating name to have plopped so unceremoniously in a review of one’s work, and I don’t do it heedless of the man’s resonance -- the Burning Hell are knowingly assembling from pieces that one can’t help but feel that they recognize predate them, working with charisma and wit towards some obvious, and yet essential, notion of love and humor in the face of inevitable transience.