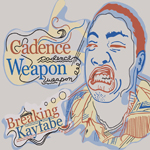 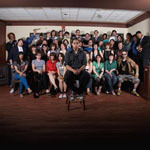 The suspicion sneaked into my mind as I walked out of Brad Bird’s Ratatouille, teary-eyed and stirred to my core, that perhaps part of the film’s emotional resonance with me was due to its coda being delivered by (and about the humanity of) a critic. I’ve read this reservation voiced elsewhere, and, while I still think the film’s a colossally interesting mish-mash of progressive thought and the nature of the artist and the most visually electrifying animated film this side of Paprika, there’s some credence to this reservation. If nothing else, the film has something to say that happens to involve buttering up the critical establishment.

Cadence Weapon, as his every press sheet and review state, comes from a background of music journalism—former Pitchfork writer, son of a DJ, here we go again. I got some shit for my review of his still-inspirational debut Breaking Kayfabe (2005), wherein I noted for integrity’s sake that he shared a blog with my editor. I believe Bird’s statement was whole and the narrative arc happened to shoot through the heart of the critical-minded in the audience, but Afterparty Babies is a more problematic affair. Listening to the record feels at times like watching a boxing match between Cadence Weapon and Rollie Pemberton, each throwing expectations like jabs and dodging attempts at classification. It is an exhausting, ear-biting affair, but I can’t shirk its endless cleverness and music nerd enthusiasm. It is pointed, after all, at my heart.

So here’s a music nerd game, a critic’s Sunday afternoon: spot the influence. I think maybe Pemberton spent too much time listening to Futuresex (2005) and tried to make his own version. After the arrestingly a capella opener oohs ahs and mmbops asleep, “In Search Of The Youth Crew” sets the record’s sonic palette, all chintzy electro pulse, uptempo drums, and catchphrase choruses. Fourteen tracks and nigh on an hour of this is brutal via headphone and probably twenty-five minutes too much via house party boombox, but in small doses any of these can be a stirring listen. (And side by side in the record’s middle the aesthetic solidifies into two limber shimmering bangers: the freshly loping babble of “Real Estate” and the mutant leviathan string lines of “Messages Matter.”) In its muddle, its brilliance, its electro-as-decadence schtick and its virulent self-satisfaction Afterparty Babies recalls no one so much as Timbaland under Timberlake’s muse. With maybe a hint of From Here We Go Sublime (2007) thrown in.

The record is a virtuosic display of talent (I don’t even know what sounds I’m hearing on the chorus of “Juliann Wilding”) but it comes across both too eager to impress and too self-satisfied to edit. Certainly as a writer Pemberton understands the importance of the second of these, and certainly as an aesthete he understands the dangers of the first. His wordplay remains direct and lively but by the end of the record he’s cramming references to Ian Curtis, Memento, the Quannum discography and (maybe) Arrested Development within seconds of one another, whereas a single (or none) of these would’ve been less distracting, and the song’s point if it has one will come through less obfuscated. But, like I’m saying, certainly Pemberton knows that occasionally we have to delete the best line ever written in order to better serve the larger piece. His namedropping doesn’t feel disingenuous, and I can sympathize with the curse of categorizing everything in terms of culture. But the emo-rap delivery of these lines starts to grate, and if we’ve learned anything from Finding Forever (2007) it’s what happens when an emcee attempts pop culture references past his prime.

The thing about these aesthetic failures is that they signal only the breadth of Cadence Weapon’s ambition, and that the listener is left with the same impression of him as a musician and (more importantly) of Pemberton as a person. It is a bracing artist indeed that can release an album so flawed and yet so worthy of high rating. We want to like him as much as he seems to like himself; we want to hang out at these afterparties with him, share a blog, talk Beanie Sigel. So here’s another game he might recognize, RIP Stylus: playing God. Cut any three tracks—say, “Tattoos and What They Really Feel Like,” “Unsuccessful Club Nights,” and “True Story”—cut every other track from five minutes to no more than 3:20, and put “Do I Miss My Friends” as the healing salve finale rather than the odd-duck opener. Dirty pop: the record just jumped ten points. I could make an awesome indie-rap album.