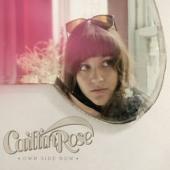 Caitlin Rose doesn’t sit comfortably in the context of country or American roots music. While she’s a singer-songwriter from Nashville who acknowledges Patsy Cline, Loretta Lynn, and Linda Ronstadt as influences, she’s also gone out of her way to profess her love for the Mountain Goats, Daniel Johnston, author Richard Brautigan, and punk inspired three-chord songwriting. Her debut album, Own Side Now, is as alt-country as it is country-pop, as rough-edged as it is twee, as much a display of Rose’s knowledge of country tropes as it is the sound of a performer trying to make all of them hers.

The album’s first few songs quickly make this clear. Both “Learning to Ride” and “Own Side” sport clean, gentle-sounding production that only hints at standard Nashville country twang, and Rose’s straightforward melodies help to understate her lyrics as she simultaneously asserts herself and appears utterly vulnerable. When she asks “Who’s gonna want me when I’m just somewhere you’ve been?” the turn of phrase is so disarming as to immediately call attention to itself, virtually demanding reappraisal of everything that precedes it. The sweetness of the first verses of “For the Rabbits” gets undercut by the desperation of its chorus, as well as the guitar stabs and snare work that comes through prominently for the first time on the album.

Then there’s “Shanghai Cigarettes,” an unexpected, effortless-sounding country-pop triumph. Rose plays it utterly straight, using a conventional narrative structure—the end of a pack of cigarettes as closure to a failed relationship, with the moment of breakup likened to the addressee’s inability to quit smoking—but it works far better than it has any right to, simultaneously reinforcing and eschewing cliché.

Lambchop house producer Mark Nevers (also known for his work with Bonnie “Prince” Billy, Why?, and many others) deserves a fair amount of credit here, too. While the tempos here are considerably faster and the arrangements nowhere near as big as on his most grandiose productions, he manages to wring his trademark ear-raising warmth out of guitar, piano, bass, and drums—something he didn’t succeed at on the comparatively tinny but instrumentally similar Silver Jews album Lookout Mountain, Lookout Sea (2008). He makes the percussion on “New York” sound strikingly rich and gets textures and tension out of “Things Change,” the album’s longest song, that sounds so good that it practically overshadows Rose’s own performance.

In places, like the album’s most superficially country, this isn’t a bad thing. Those moments aren’t as immediately gripping, but they at least sound fantastic, which helps the longer songs that make up the album’s second half far more replayable than they would be otherwise, though their prettiness may understate the punches they try to pull. “Coming Up” ends on a fairly conventional, borderline honkytonk outro that cuts off suddenly to the sound of hiccups, and it seems an effective point of closure and a summary of what Rose sets out to achieve on her debut: to embrace Nashville music while searching for ways to subvert its trappings.

At only 23, Rose still has plenty of time and room to grow, and across Own Side Now she sounds at times in search of a singular voice yet also utterly confident in her band, her arrangements, and her songs. As a consequence, it’s hard to tell what exactly she’ll do next; it’s not so hard to tell that it’ll probably be worth seeking out, as her potential, as evidenced here, is enormous.