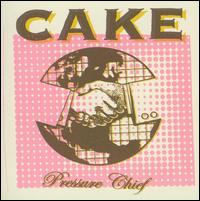 So, let me set the scene for you. A battered and bruised sub-compact speeds across Highway 16, snaking through the northern Alberta Rocky Mountains. A future music critic and a friend are navigating their way to Vancouver, admiring the snow-capped mountains and strangely indifferent and unlawfully-fed wildlife. In need of music, the future critic pulls out a CD he had purchased not the day before: Cake's fourth effort, titled Comfort Eagle (2001). For the next 40-or-so minutes, the two travellers were treated to pop music at its finest. The familiar warm trumpet accompaniment of Cake's signatrue soft-but-heavy guitar work was a welcome companion along the journey, enhanced--or perhaps enhanced by--the serenity that is the Rocky Mountain road-trip.

Okay, so I'm being melodramatic. The point is to remind the reader that Comfort Eagle is an excellent album, perhaps Cake's finest. The band has spent the better part of a decade carving out a niche in the music biz, becoming the foremost distributors of sarcasm-driven, ironical pop musings. They've always been a short jog away from the well-beaten path, but somehow have always remained within eyeshot of the mainstream. Basically, they're weird enough to satisfy most indie fans, while being accessible enough to appeal to Top 40 enthusiasts. Unfortunately, their position is the former category is rather tenuous, and isn't enhanced by multiple listens to Pressure Chief.

If Comfort Eagle, with its overwhelmingly enthusiastic feel, was a celebration of music and life, then Pressure Chief has John McCrea perhaps at his most ornery. Although not a heavy album, it certainly can appear as such when compared to most of Cake's light-hearted repertoire. The album's opener, "Wheels," is the dictation of the post-mortem of a bad relationship: "And I could get away from you / And you could get away from me / And we could live each separately in our cities in the sun." The album's first single and second track, "No Phone," is the perhaps the "morning after" song; both tracks contain the pop-funk signature that Cake should, if they already haven't, patent. The "heaviness" of Pressure Chief continues with "Take It All Away" and "Dime"---both more laid-back affairs that sport acoustic guitars and Ric Ocasek-inspired keyboard lines.

The tone of the album begins to pick up with the lyrically sparse "Carbon Monoxide," in which McCrea asks, "where's the air?" It wouldn't be a Cake album with at least one driving song, and this is Pressure Chief's "Seatbelts and Safety Belts." The album's half-way point is marked by the cleverly-performed cover of Bread's 1972 Top-40 hit, "The Guitar Man." Complete with a keyboard and guitar arrangements that skim dangerously close to a rip off of "Yoshimi Battles the Pink Robots, Pt. 1," it just might be the album's best and catchiest song. It's usually a bad sign when an artist's best offering is a cover tune; it can often signal a decline in creative output. But there are exceptions---take Frank Black, for one, who made an exception for the general rule with his cover of the Beach Boys' "Hang onto Your Ego."

The remainder of the album is rather non-descript typical fare for Cake. "Waiting" and "She'll Hang the Baskets" are simple enough songs, again in possession of Cake's country-twang-meets-Flaming Lips-keyboard arrangments. Neither are bad songs, they simply lack the staying power and humming factor that the songs on Comfort Eagle had in abundance. The album's closer, "Tougher Than It Is," is affirmation of life and love, quite likely directed at McCrea himself given the heartache expressed in the first four tracks. "Well the more you try to shake the cat / The more the thing will bite and scratch / It's best I think to leave its fur / and to listen to its silky purr / Some people like to make life a little tougher than it is." With its odd-signature and absence of McCrea's deadpan vocals, it certainly ranks as one of the album's lasting songs.

Cake's back catalgoue is quite excellent, if not dilute, and had---as it increasingly becomes clear with each release--peaked with Comfort Eagle. Although Pressure Chief isn't a bad album, several of its songs come off like b-side compliation fodder rather than a batch of fresh material. For the Cake virgins out there, pick up Eagle or their debut, 1995's Motorcade of Generosity, instead. In the meantime, I'll be listening to Pressure Chief on my roadtrip to Winnipeg.