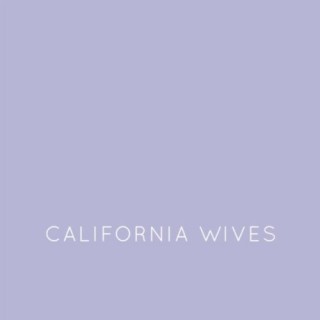 Usually when a gentleman asks a lady music writer if she wants to come see his friends’ band play, it’s not because he just really thinks the band deserves exposure. So when a local coffeeshop dude asked if I wanted to check out some guys he went to school with, playing at Bottom Lounge, I had a few doubts and suspicions reflexively rise to the surface. After having been surprised by my fair share of lukewarm-to-miserable concerts, like this band who had one song on Scrubs once upon a time, or this dude who sounded like Creed and sang about shaving his head while playing seven-minute-long bass progressions (I wish I were making that one up)…well, I did scrounge up California Wives’ debut EP Affair prior to making any whisper of commitment—and forthwith realized this barista guy did probably, actually, just want me to listen to his friends’ band. In this California Wives debut, they are cutting their teeth on some pretty scrappy, well-seasoned pop songwriting.

Chicago’s Hans Michel (guitar, keys), Dan Zima (vocals, bass, guitar), and Joe O’Connor (drums) originally banded together to play songs that were more akin to, say, an AC/DC cover band. As high school boys are wont to do, I suppose. But the introduction of half-Ben-Gibbard, half-Phoenix-guy, limber-voiced Jason Kramer (and some New Order listening?) in 2009 toppled them smack into that new wave indie-pop arena, laced with catchy dance incentives and tricked-out, melodic refrains, on par with the heavier hitters this year.

Besides the drummer and the occasional guitar shreds clinging for dear life to the bare threads of AC/DC-like styling (and I’m not saying that’s a bad thing), the most interesting aspects of Affair are in the vocal/guitar dynamics and tastes of vocal ornamentation. For instance, in the opening track there’s a sudden, deep, echoing plummet and shadow—a door in the floor that opens up beneath the last notes in the chorus, sending it falling to unexpected and reverberating depths. Not to mention how they break out the heavy artillery vocab right off the bat, with Kramer cracking the word “sycophant” very noticeably in the first line. That felt nice. While the opening track’s title itself, “Blood Red Youth,” may send up flares of young-band-angst warning signals, it’s pretty savvy clinchers like that, those really tight details, that turn the conversation around.

Song after song, the lyrics remain on the hazier side of obscure, and, while not being so obscure they can be overlooked, Kramer plays with his cards real damn close to his chest. He manages to cover familiar territory (the youthful, “The Way You Look Tonight” sentiments of “Twenty Three”) with a refined distance, a self-screening that takes most songwriters a few releases to acquire, if they do. To its benefit, it’s difficult to discern who “you” is in the first track, and it’s an enjoyable effort putting together who the “you” is in the songs that follow.

While “Guilt” may drag a little, “Purple”—its natural momentum, brisk cymbals, jaunty vocals, and inventive guitar noodling—knocks the EP back into its consistently hook-driven terrain. And at just about five and a half minutes, closing track “Photolights” is deservedly the song with the most face-time on the EP. Tapping into more outer space bleeps, feedback sampling, and all the blip-spangled, metallic luster of a Postal Service track, their New Order spunk rubbed all over it, it’s a solid ending to a surprisingly smooth, well-rounded first EP.

It actually may be too smooth, considering how EPs are usually exploratory, rough events—remember the banjo in Sunset Rubdown’s?—and considering how big a pool California Wives are suddenly in. The most unfortunate thing is just how big that pool is; I wince to think how many indie dance-pop bands I’ve touted this year alone. To tackle a straight, upwards trajectory without a grittier opening can be a difficult thing to execute. But they’ve some real steely chops for a young band, and their writing, the smart hooks, and the duration of the songs: they make me pretty curious to see what these guys would do with a full-length album.

Suffice it to say: Affair is an EP that not only got my ass to the live show (hopefully there’ll be more live shows soon?), it kept me hanging around even after watching some dude in their opener douche-out on a sitar on a raised platform for fucking ever.