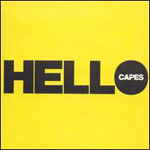 Blur is back, WOOT!

Oh. Wait. That’s not Damon Albarn. I mean, he’s British. But not Albarn. But -- that synth, and those chalky six-string licks, and wait -- that was definitely just a big “La La La La La La” chorus for a second. And there it is again, except going, “Na, Na Na Na Na, Na Na Na.” And then the second track -- same elements, and everything goes synth-happy in the chorus again.

“Dude, we get the picture. It sounds a lot like Parklife (or The Great Escape).”

But don’t knock it as “derivative,” because any way you look at it, Hello pretty much kicks ass. In fact, it mines the cheeky pop grandeur of Parklife only insofar as it weds it with the chord-rock of The Blue Album from That Band that Sucks Now. Which even an idiot would have to admit is fucking sweet.

The resurrection of that Britpop spirit is wildly vivacious in Hello. While Bloc Party is busy moping over stuff like marriages with diets of glass and poison and other such depressing shit, and while Art Brut is going as ironically over the top as possible, The Capes, from the same fertile London region, are just rocking like fun is fun again. Pump your fists, people, and thrash as awkwardly as you like.

These riffs are just golden, and their cohabitation with clever synth work isn’t gimmicky in the least. The Capes thread it all through with superb melodies, and wind it all into a tight coil of explosive energy. “Super Girls” unrolls a roaring riff and crashes it into a whipping synth trill, takes it easy for a second, and then barrels forth again into a brilliant chorus. A bridge takes advantage of the classic riff-and-vocals-only tension builder, and then joyously rebounds into another chorus and Weezer-esque coda. “What You Want,” launches a rippingly good chorus grenade out of its bass-led verses, and “First Base” wastes all of like, 10 seconds before unleashing its chorded initial hook and bursting out of the gates, bringing along a phenomenal synth bridge for the ride.

Tightness, conciseness, melodic prowess, and energy absolutely rule Capes, powering its 39 unrelenting minutes into an adrenaline heaven. It’s pop of a highly refined cast, unerringly hitting the sweet spot of accessible pleasure with hardly a single cheap trick. Arguably the sublime chorus of “Shinjiku Hi 5,” doesn’t really improve on the kind of mastered rush that Weezer has completely forgotten how to achieve, but after all, if Weezer have forgotten it, and if Albarn’s meditating in Africa, cheers to the Capes for nailing it as well as their predecessors. Regardless of the traceability of their influences--which shade rather than constitute this band--the group’s character charges through its music intact. Plus, tracks like “Tightly Wound” evade the parameters of their predecessors well enough (via clever twists and melodic variations) to reveal a set of blokes that are more than capable of reshaping the musical tradition that so often serves them well in Hello.

The Capes emphatically prove their capacity for mimicry-free synthesis of seminal influences with the melodically striking and atmospherically fragile closer, “Sun Roof,” whose electronic textures and keyboarding are downright otherworldly in contrast to their other tracks. The closer does the double duty of gesturing to the band’s latent potential for growth and appropriately finessing a finale to a thunderous piece of rock musicianship. But given the quality of this outing, one ought not to bother (for now) about future directions from here--the Capes will have you at Hello.