1. Low Budget Slow Motion Soundtrack Song for the Leaving Scene
2. Die
3. The Color That Your Eyes Changed With the Color of Your Hair
4. One Night Stand
5. You Should Be Hated Here
6. Drunk w/ the Only Saints I Know
7. Phantom Fireworks
8. So You Wanna Be a Superhero
9. Brooke Daniels’ Tiny Broken Fingers
10. Ignorant Piece of Shit
11. Blessed Arms That Hold You Tight, Freezing Cold and Alone
12. Blue Champagne Glass
13. September Come Take This Heart Away
14. All Apologies and Smiles, Yours Truely, Ugly Valentine
15. Sympathy Bush
16. They’ll Only Miss You When You Leave 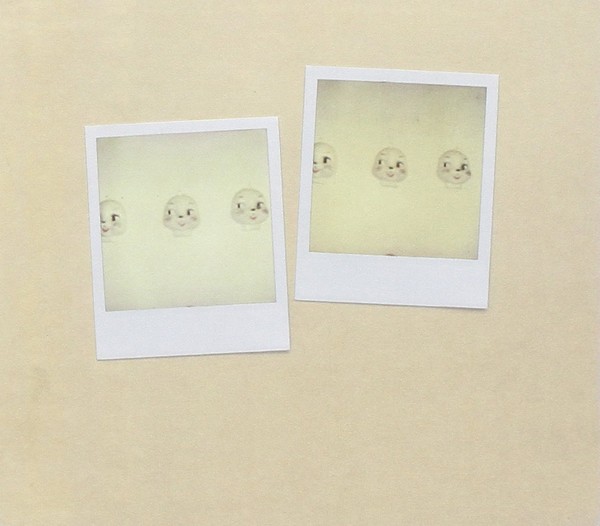 Like letter folded around letter, in a Chinese star. Like a love letter you fold around another about how you’re moving on, maybe, around another about how you actually don’t know what to do, around a confession, around another letter saying, “never mind, I’ll do anything”—to be complexly folded into a bulky, labyrinthian note bursting to shit with everything you can’t keep stuffed down. The kind of complicated letter you discreetly stuffed into someone’s locker or hand in the hallway, or just kept impossibly stuffed down in your own chest. Think back: there was something so terrible and indulgent about feeling that embarrassed and exposed the first time around, when you realize what a mistake it was and there’s just no way to hold onto your composure after writing letters like that. It is that feeling of lost composure that comes with even sharing these songs, that makes this Carissa’s Wierd collection feel so personal and private and almost too embarrassing to promote all unfettered-like.

Sixteen songs, handpicked by the core duo of Jenn Ghetto and Mat Brooke. Beaten black and blue, they huddle against your chest with varying degrees of martyrdom, self-sacrifice, revelation, and regret: the curious and unmistakable sound of Ghetto and Brooke impaling their own hearts on the microphone stands. They are the kind of unsettling, juvenile songs that make you crawl back inside yourself for sweetly agonizing introspection. To think about your dreams, think about and become deeply invested in what people think about you, what people think when you aren’t around, they make you think about people when they aren’t around, and think about how much you want to see someone’s face suddenly. Y’know. Those kinds of songs. And they do them really brilliantly.

From the “I will keep waiting for you” sentiments scrawled across the opening song, “Low Budget Slow Motion Soundtrack for the Leaving Scene,” these are mostly modest themes with startling sophistication in the hooks, muffled and pleading exchanges and the way the textures ravel and unwind and progress in surprising ways. The first track so slow and wrought with introspection that the simple, passionate sawing of strings, building layers of vocals and a fist-pounding beat in the following song, “Die” by contrast, just rock the everloving shit out of me.

Brooke’s voice always half hidden, or completely buried like hands shoved deep in pockets. In every song from this seven year span, before he was “Mat Brooke of Band of Horses” or “Mat Brooke from Grand Archives” you can hear the crushed, down-tilt of his chin, the crippling thoughtfulness, especially in the sad, stretching waltz where he climbs out from under the arcs and jumps of Ghetto’s voice, “The Color That Your Eyes Changed With the Color of Your Hair.”

Ghetto’s voice like a hand slipping in his hand, or occasionally leaping above like a strand of rogue emotion you just can’t shove back down. Something so urgent and irrepressible it’s inherently coupled with a sense of gutting regret. You hear the earnestness and desperation that drive Ghetto to sing and write under her S moniker six years after she said she wouldn’t again. For whatever flaws you find, she only picks up her guitar when she’s completely overwhelmed. And for all the places the band members have gone since these are the core elements that make Carrissa’s Wierd so strange and enjoyable, in every heartfelt idiosyncrasy.

Some songs I know so well that most of the enjoyment is in the awareness of how my heart’s being held tenuously in the jaws of the building refrains till in the last leg of the song, where they just crunch down. So familiar, after a decade of hearing them, I forget that others don’t know what’s coming, don’t feel the “just wait, just wait…” If you’re one of those people who hasn’t heard these songs: enjoy that first run-through. Enjoy the first time “September Come Take This Heart Away” spills over into sudden, heart-breaking lyrics that build up in indiscernible, understated climax. Enjoy the first time the saturated elements of “You Should Be Hated Here” spool into themselves in an immediate tangle and then slowly deconstruct, winding away at the end with to the single string of their voices trailing off in “and it all comes down, to composure that’s been lost…” and sparse strums. The first time the leaping hooks in “One Nite Stand” get stuck in your head. They could be there awhile. I can’t help but have their hooks stick, sink into my whistles and hums and spin slowly in my brain. You really carry them with you all day, like a mind-cluttering crush or breakup or distracting buzz of having made out with the right person at exactly the right moment. Or a snippet of conversation you wished you’d handled differently.

The album title might be a bit of a laugh. But in all honesty, like some leftover remnant or letter of someone we loved, we just don’t need this from them to remember—the reunion tour, the vinyl and digital re-releases of Ugly But Honest (1999), You Should Be at Home Here (2001), and Songs About Leaving (2002). Instead, we find these motions and this compilation of carefully chosen songs and hold them to our faces for a moment like a forgotten t-shirt, read it over like finding a receipt or some note from an ex stuffed in a book they were reading. It feels like something to be indulged privately.

In my heart of hearts, of course I wish they would bust out with something brand spanking new that I can’t wait to thrust into everyone’s ears with justified gusto. Something that doesn’t feel so revealing or embarrassing (because it does), or even something less dated (whether it’s a chronologically or just emotionally for the mid-to-upper-twenty-somethings). Maybe we can at least hope for a rush of bootlegs as a result of the reunion show? Regardless, this album is more like a personal gesture or handpicked memento, like everything else they produced together, jam-packed with surprising sophistication and heart-wrenchingly candid, potentially age-inappropriate sentimentality. That maybe you won’t forward on, or burn off for friends, but maybe you will love in the confines of your headphones and just want to time exactly right, so that it is playing just as someone you really want to ask to stay with you enters the room. Because being emotionally indulgent very rarely sounds this selfless, this sincere, this simply beautiful.