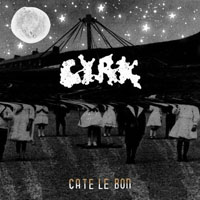 Cate Le Bon is an artist who seems poised on the brink of breaking out: with her aura of mystery, her out-of-the-way provenance (she’s Welsh), and her otherworldly, Nico-esque voice, she sets herself apart and then some from so many recent garage-pop purveyors. Following a few years of touring and collaborations with fellow countryman Gruff Rhys, Le Bon released her first album, Me Oh My (2009), to a quiet but insistently strong reception. Now, on her latest, Cyrk, she pushes herself in some predictable but well-earned ways, mixing elements of ’60s garage, Britpop, and krautrock into her pre-established template. While Cyrk’s at times stark, chilly sound might not make it a favorite come spring, it has just enough warmth for February, and enough surprises to elevate it above your standard synth-and-guitar indie rock.

Cyrk as a whole is mighty succinct and catchy, and even if it’s not teeming with ideas, Le Bon knows how to mount and manipulate atmosphere; for a dark, moody collection of songs, it’s a surprisingly fun listen. Le Bon’s voice is more expressive, tuneful, and generally beautiful than the constant Nico comparisons would suggest (I know I’m at fault here, too; it’s so hard to resist), perhaps more akin to the Concretes’ Victoria Bergsman than anyone else. The most straightforward songs, like big-poppy “Puts Me to Work,” “Cyrk,” and “The Man I Wanted” (which uncannily resembles peak-era Blur) act mainly as a showcase for Le Bon’s way with a lilting, off-kilter melody, and “Julia” is particularly arresting in this regard.

So: some whimsy, but also some rock ’n roll. Just when you think the record is verging on the ethereal (around midpoint “Greta” probably), Le Bon bursts forth with some genuinely tight and bright, even head-on rocking, tracks like the album’s epic “Fold the Cloth,” which features some sincerely cathartic guitar. The longest song on the record, “Fold the Cloth” is also its most complicated; at times it’s haunting and spare, at time it’s got a full organ-backed garage sound. Subtle indications arise early on the record—like the horns on “Cyrk” and “Greta”—that demonstrate Le Bon’s interested in exploring, but “Fold the Cloth” and the similar “Through the Mill” take things to the next level.

The best demonstration of Le Bon’s strengths comes with closing two-parter “Ploughing Out.” Part one features the record’s loveliest vocal melody and most intelligible, affecting lyrics. “On the last day of the year,” Le Bon sings, “I’m just happy to be here”; but later she signals her unease with such happiness: “On the worst day of your life / You’d still love more things than I like.” It’s almost enough that “Ploughing Out Part 1” is a pitch-perfect ballad, but when part two dissolves its sweet melody in a cacophony of trumpets, organ, guitar, and drums, it forms the psychedelic coda we didn’t know we were looking for.

“Ploughing Out” offers the kind of juxtaposition that makes Cyrk work so winningly: Le Bon could easily rest on her affecting voice, but she continues to push her songs and her records as a whole in some surprising directions. Pretty but not boring, eclectic but not overindulgent, Cyrk is the work of an artist still messing with all the possibilities in front of her. She may not quite be sure who she is yet, but we benefit from her ability to not see that as a bad thing at all.