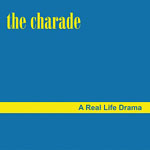 It’s cool to have influences. In Roddy Doyle’s The Commitments (a real tour de force of pop music fiction, if you ever get the chance) proto-hipster Jimmy Rabbitte quizzes every applicant for his new soul group on their inspirations right off. Even when he gets a seemingly authentic soul man – Jimmy “The Lips” Fagan, who claims to have performed with everyone from The Beatles to James Brown – he can’t help but ask. Swedish trio The Charade, ironically enough, makes no attempt at hiding its record collection under the bed; the band’s latest full-length, A Real Life Drama, is a celebration of the classicist pop aesthetic, referencing from the lush dramatics of Sarah Records groups like The Field Mice all the way back to The Byrds’ riff-laden folk-rock.

Coy title aside, A Real Life Drama ignores the cutesier side of indie-pop, spending its brief half-hour on major key guitar lines and rich harmonies. Ingela Matsson, lead singer on the bulk of the tracks, has a detached, airy voice that fits the band’s blissed-out sound perfectly. When she’s not harmonizing with her own multi-tracked voice, she’s accompanied by guitarist Magnus Karlsson, who takes the lead duties for highlight “Music Makes Me Sick.” Groups with more than one singer tend to make some concessions when it comes to the secondary performer, especially when an entrancing female voice fronts the band – see Asobi Seksu and Devics for recent examples – but for the most part, Karlsson’s accented, earthier voice holds its own.

The music fits its singers snugger than an autumn sweater, providing plenty of melodic intrigue and rhythmic thump in songs like “Sunny Winter Afternoon,” which boasts a bittersweet horn part that echoes the song’s torn emotionality. The lead guitar of “Music Makes Me Sick” nods directly at the Byrds’ rendition of “Mr. Tambourine Man,” while “Rain On Your Parade” evokes early My Bloody Valentine with its nearly droning harmonies. Matsson’s songs lean further toward more contemporary indie-pop while Karlsson is clearly the classic rocker, but the band has no problem synthesizing the inspirations of its two songwriters into a single obliging sound.

While the music balances finely between homage and modernization, the lyrics are predictably romantic, melancholy fare. “My Song To You” choruses with the lines “it’s the simple little things you always do / that make the whole world love you,” and the words of other tracks (“Life is something inside me, seeking to come out,” on “Dressed In Yellow and Blue,” for instance) don’t reach any deeper. Still, songs of this nature should hardly be expected to have lyrics heavier than their sunny sheen. The Charade is first and foremost a crafter of cheery, seamless music, and with A Real Life Drama, the band has created an album that wears its influences as easily and beautifully as a summer bonnet.