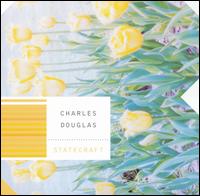 It’s hard to keep your head up in Ohio sometimes. When the bitter cold lets up, the snow decays on the side of the streets and walkways, bleeding brown like bruised gums. Gray, half-solid puddles form in places without any noticeable recession, seemingly defying physics for the simple pleasure of ruining the bottom of my jeans. The sky hangs low, implacable, unceasingly gloomy. People scurry from doorways to cars, fleeing with mob-like abandon as if fresh air was Godzilla, and, to be honest, this weather’s not much better than a giant man-hating lizard. February’s a hard month in the Midwest.

But the right kind of album can help, and Charles Douglas’ Statecraft is just the type of measured aid I — shit, most of us — need. The fourth album from the New York songsmith is a concise, paper-light package of that increasingly rare find: solid pop music, complete with gleaming sunspots (“Crackerjack”) and incisive brokenness (“The Island”). The album benefits from the presence of O.G. angular guitarist, Joey Santiago, particularly on opener “Free At Last”, the type of summer-night swagger-rock that used to be easier to come by in the early ‘90s.

Douglas writes breezy, underhanded songs like a happy loner, content with losing the girl as long as it nets him a good song later. There are no alarms and no surprises here, not a single sonic experiment: Statecraft is as straight-forward as they come. It’s a testament to his melodic skill that this album holds up at all, and when he channels Pavement, the Ramones, and Joe Jackson, he’s doing more than a good impression. His wry wit doesn’t hurt, either: “Chan” is a hilarious, hopeless love song to that Evil Queen of Indie, Ms. Cat Power herself.

Statecraft’s certainly not perfect: of the sixteen songs here, five or six could be excised without losing the album’s luster. “Blues for Catalina” and “I Don’t Care” are imminently skippable filler, content to sit on one pretty melody for three minutes regardless of the listener’s patience. Douglas’ devotion to melodic and lyrical simplicity is an occasional pitfall: one of the album’s best tracks, “Crackerjack,” suffers for his willingness to simply repeat the opening verse and not expand on the clever, engaging story.

But this isn’t a lyrics-booklet type of album. It’s the type of album you put on during the drive home the next morning — mildly hungover, smoking a joint with a friend, turned up loud to compensate for the rolled down windows. Douglas’ lyrics are meant to pass through as easily as wind through the car, sticking only long enough to get the joke and then fading with the guitar line like smoke out the back window. It’ll be awhile until I’m back there, sitting shotgun and staring at the rolling landscape that I tell myself is buried underneath all the sludge. I’ll keep this album on hand until then.