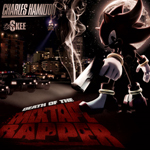 Death of the Mixtape Rapper Mixtape

A bit of context: Charles Hamilton is an asshole. Endorsed in some way or another by Okayplayer, Hamilton’s threatened to release some nine gazillion (okay, eight) mixtapes over the next quarter or so, which seems to be a cataclysmically stupid strategy that oversaturates the market as quickly as it alerts it to Hamilton’s presence. Hamilton may be aware of this; he has, after all, titled the first of his eight mixtapes to predict his own demise. I don’t know if this is witty or meta or just entirely daft. Let’s move on.

Evaluating Hamilton’s unofficial debut outside the context of all this dizzying prolificacy, it’s a satisfying rap record. And perhaps all this dust Hamilton is kicking up obscures the fact that he is, despite being a work in progress, a good rapper, sporting suitable swagger tempered with enough neuroticism to save him from categorization as a cartoonish caricature. Not that he doesn’t go to Herculean lengths to transform himself into some enigma more persona than person: he self-promotes within tracks, shouting out his website on several hooks, generally creating the aural equivalent of watching the World Series—brought to you by Pfizer. This is annoying.

But for all the assholery, Charles Hamilton is worth paying attention to due to, erm, that very assholishness. See “Harlem,” where he blacks out over a merely good assemblage of propulsive blips, sounding less self-consciously idiosyncratic than anywhere else here. He sneers, “Came in the game with bite marks on my flow / ‘I bet I can sound like Charles’—nigga, no!” This is satisfying in that Hamilton seems to travel wherever his refreshingly inventive impulses take him as opposed to adhering to some pre-constructed persona to which he seems so vehemently committed to becoming; because Hamilton can muster some staggering bars when he cuts the bullshit. Further proof is provided by “Do What You Love,” an exercise in playing with syllables masquerading as introspection. It’s pointless and rather unimpressive to put in text, but Hamilton manages to create multi-syllabic rhyme schemes out of what seems like simple anecdotal chit chat.

So why, then, does Hamilton waste so much effort constructing the facade of some arrogant nerd instead of just leaning on his considerable skills? It’s a warped strategy, perhaps one that Hamilton feels forced into since his signing to Interscope, feeling the need to stir up his own buzz, being certain that he’ll get little to no push from the major he signed to (he implies as much on “Musicsuicide”). If so, it’s hard to fault him, but it doesn’t change the nature of a rather ill-conceived concept. All the self-referentiality, commenting on mixtape rappers while being one himself; discussing aspects of mixtapes on a mixtape; rapping over “A Milli.”

Actually, hold on to that for a second because I think it’s a (meta-)concept I can discuss without feeling like a wormhole might open up. Hamilton builds the anticipation for his rapping over the overused beat via a few unentertaining skits involving an A&R prodding him with “Lil’ Wayne is so fucking hot right now!” And then he briefly admits to feeling a bit foolish for being the nine trillionth rapper to sleep with 2008’s slutty colossus. When Hamilton proceeds to finally shut up he serves as one of the track’s more worthy partners (he’s no Weezy, though), capably spouting gleeful boasts (“I enjoy the rap scene / You exploited black teens”) and saturating the track with his own odd charm. This is a microcosm of Hamilton’s whole conundrum: He’s blatantly annoying until he actually, y’know, raps. And that’s infinitely better than the inverse, which perhaps bodes well as Hamilton grows into the massive britches he so fervently aspires to rock.