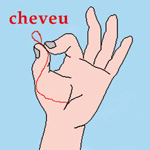 This Parisian trio has been making scene noise, and for plenty good reason: their songs go a long way to carve out a real living end, so what you get is a neatly reductive sound universe, all patent recall and sass and open Gallic charm. Byron Coley calls them “devolved in a lopsided way,” which is sort of spot-on. Cheveu excel at keeping things simple in the heat of an energetic rave-up. You sort of imagine these guys never breaking an honest sweat. Their songs roll out like a weird iteration of nature—all the rock tropes we thought we’d forgot, or lost interest in—made extant and coy, and attacked from within.

If we lax out the subgenres, it’s pretty easy to finger these guys as the ultimate in cool socio-artistic stonewalling. The first ten songs off Cheveu sound like miniature armies, kind of determined and demented and superaddled like a group in continuous process. A band getting kinda creative, in short, and maybe kinda high and for sure a band always on the verge of just plain fucking around, but a band, still, aware of its contours and limitations and the point at which, you know, it’s best probably just to leap. (For further information check the indefinite, sprawling “Unemployment Blues.”)

The surf-beat strut of “Lola Langusta” posits itself as the ultimate jawn—a kind of oversexed manoeuvre with underdog hangups, for a brief moment a total pop oddity, and then a horns-regardless total mess of sense. Its one-track rhythm and top-heavy climax mark may be the logical apotheosis of the Cheveu sound, which is only quietly impotent. Hearing it is knowing that being in Cheveu must be the best gig in town; when its gears shift into a troglodyte bash through Some Girls, it elicits that special blend of relaxed abandon and worked-in stimulation that’s almost condescending to analyse; the effect positively studs what was never yours to question. As in shit sounds awesome. And like the best rock delusions, it’s more than a feeling: “Langusta,” come its cruising victory lap, makes you sort of embarrassed for having them.

Cheveu is filled with this sort of freakishness. “Langusta” just anchors the record’s more abstract elements. Landing in the middle, it makes every song after it feel like a comedown, whereas those leading up to it positively spring like the chase. Everything, in short, is made better by its presence and far from being a plain standout, it gives the record cohesiveness and dynamism and a general level of fun artistry that marks it a step above a straight singles work-through. Which, if we’re being completely cynical, is what this is: most of these songs having been cartelled already as stand-alone singles or CDRs. Still, it’s not like this band is U2 or anything, and they’re certainly not at risk of coming across as pose-bent or annoying. Their songs brim with too much big steel va-va-voom, a fizzing sense of character that just about bounds off their facility to make us want to hear the things we think we don’t need. So “Jacob’s Fight” roars in like a retardo version of Brainiac, and “Dog” just about splits the difference between Iggy and the Stooges. Elsewhere, we have gonzo takes on James Bond (“Superhero”) and a bizarre, surreal Solondz pull (“Happiness”) that’s insignificant till you get all stoic about it.

This record is rude, rancorous; it’s balls-out like it’s got a mad point to push, but mad because that point is everything or actually it’s just about screwing and dunderheadedness and how to make that same-old song interesting again. It tricks through a larger stylistic mess—mod, jangle, mash—than any three-piece should have hand rights on. Dead-simple and pattern-sweet, Cheveu is an expression of wild, tuft out insensibility. It makes me want to be a better person.