1. Falling Awake
2. In Praise of Shadows
3. The Glass House
4. Cities Without Citadels
5. Pangea
6. Funeral of Dreams
7. The Light in Between 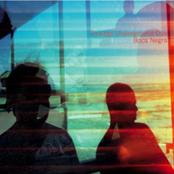 In Praise of Shadows

Chicago Underground Duo consists of Chad Taylor on percussion and Rob Mazurek on melodies, which is a reductive way of saying that each musician employs a whole arsenal of instrumentation to create what one might even more reductively call “jazz.” The basic elements of jazz are here; Mazurek’s cornet follows those modes, at least when he’s not making it sound like it’s laughing or choking, and Taylor’s drums fall into those patterns. More accurately, however, these two veterans carve a swath of experimental forays into ideas of tone and mood, and they have been playing long enough that they are quick to draw any number of styles (and electronics) into their mix.

I was fortunate enough to meet Jim from Thrill Jockey at the WLUW record fair at the Pitchfork Festival in Chicago, and while he was obviously a big fan of the entire roster, his enthusiasm for the Chicago Underground Duo (or sometimes Trio or Orchestra) was pretty obvious. Their CDs were lined up in an inviting row, the first thing you saw on the table (only outranked by the primo promotion they were giving the new Tortoise box), and Jim gave me the brief history of the group (collective?) like he was ready to pounce on anybody unaware of their awesomeness. He was right. This particular album sees the core duo working with ideas of light, and that seed propels them down well-trod avenues of out jazz with new conviction. Sure, the no-boundary mandate of the genre makes it fairly hard to bust boundaries, but what happens when two excellent musicians try to reconstruct its interior space in counter-intuitive ways from the inside?

Both have been a huge influence on and have been influenced by Tortoise, which should be obvious from the opening moments of “Falling Awake,” where Taylor’s turn at the vibraphone makes a twinkly nest for Mazurek’s brass excursions. A low kick and tom rhythmic sprawl hints at some of David Byrne’s more stylized work; the piece provides a calm (and slightly misleading) intro to an album packed with eclectic awesomeness. Which becomes immediately apparent when the title track is all avant-garde gurgitations and noises. The duo manage to sustain this quiet, relatively calm out excursion for the duration of the track’s first eight minutes, before Taylor, in a thrilling moment of musical tension, finally begins to play more than whisps of predatory percussion. This is the first real glimpse we get of his attention to detail; as Mazurek plays a deft solo, Taylor reacts to it by constantly reinventing his rhythms without changing his overall rumbling approach. Hearing such a glorious synergy of two musicians is rare; even rarer is the way the two excel at maintaining grasp of the composition as an idea, without slipping into moments of technical acumen that exist outside the boundaries of tone and feel.

“The Glass House” sounds as frigid and fragile as you might expect, delivering on the promise of “Falling Awake,” and allowing Taylor to go nuts on the vibraphone. In allowing certain notes to resonate, his listeners get a sense of melody, but those notes often get buried beneath layers of other more complex runs. This is minimalism at its finest; like Charlemagne Palestine’s Strumming Music (1974), the duo draw the hypnotic repetitions down to a singular instrument, leaving only a thudding kick (and eventually some quiet drones) for accompaniment. “Cities Without Citadels” shows Mazurek breaking out of the mellow mode he adopts for the first few songs, and allows him to alternate between piercingly clear notes and guttural runs that dodge in and out of Taylor’s six-armed percussion. “Pangea” is the most unabashedly electronic piece, as Mazurek manipulates all sorts of patches and filters which Taylor complements with the same acumen as he does the cornet. I saw Taylor pulling shit like this live that he accomplishes here towards the end, and it’s something to behold, believe me. His sense of intuition is insanely good.

“Funeral of Dreams” is my favorite jazz tune in a long time. Starting as a rhythmic out piece, Mazurek does his finest playing on the album here, his brass intoning, testifying, and giving grief, while Taylor slowly builds a kitchenette drum track behind him. It’s impressive not simply for the percussive palette, but because I think this also happens to be Taylor’s most technical and creative track. His rhythms double back to eat themselves, and when the kick finally goes into a steady quarter-note barrage before the whole thing lets loose, it sounds like an overstuffed closet exploding unexpectedly upon you, and then continuing to dance around. Fantastic.

It’s an eclectic mix brought to a close by the demure “The Light in Between,” and as the album sighs its last breaths it becomes clear that Marurek and Taylor are on the cutting edge of modern jazz. Experimental without sacrificing accessibility, moody without being grating, the album is marvelous and self-contained, and while I love really experimental music, it’s always great to hear musicians forge a workable union of both, finding the comfortable rest stops on the way to off-the-wall insanity. In Praise of Shadows is a monster, but it’s one that’s very friendly once you get inside.