1. Bonfire on the Field
2. Swaying Curtain in the Window
3. Starlight Reflecting on the Surface of the River
4. Towards a Tranquil Marsh
5. Granular Haze
6. Inside of the Pocket
7. Beside a Well 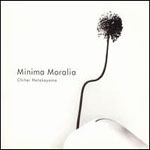 People often suggest music like Hatakeyama’s drone-based electro-acoustic work is about memory, or the past, and I tend to agree, but sometimes stuff like this can provoke visceral reactions so immediate that the feeling of actual experience is hard to shake. At times Minima Moralia conjures warm moments from my past just like, yes, a freaking photo album, and yet sometimes I hear it and can’t imagine something more vital, more present. But I think that’s the game with ambient, that if a whole slew of genres can be melded together, washed in the same water, and hinted at through turning the entire mess inside out, then why can’t this stuff play the same tricks with our temporal senses?

Hatakeyama stays on the soft, cuddly end of this spectrum; he avoids the dark, sinister vinylscapes of Philip Jeck, the experimental reach of Gas, the minimal genius of Keith Fullerton Whitman, the thick, watery enclosures of Eluvium, or the dense place-setting of Tim Hecker, opting instead for breezy forays into pretty manipulations of guitar and vibraphone. The form is essentially the same—slow builds pile track onto track, creating shimmering waves of sound—but unlike his fellow artists, Hatakeyama’s treatment of the basic vibrations of sound is meant to soothe, rather than chill. Some may find that a turn off, and I’d understand; the roots of this genre of music lie in the tension between surface and depth, like the rush of currents beneath the part of a lake you can see. But Hatakeyama manages to make it work by keeping the syrupy portions well honed, and at several opportunities he interrupts his own melodies, not by disrupting them, but by finding the logical points in his sonic stories where it makes sense to move on. What I like about the tracks on Minima Moralia is that they aren’t so romantic that they need to stop and smell each individual rose; each is a complicated integral that mathematically explains the sweaty beauty of an entire prom blooming with boutonnières and corsages.

So there’s life in the wash, and the emotion feels lived-in. “Starlight Reflecting on the Surface of a River” wraps around carefully accented guitar noises that dissolve their surroundings. “Towards a Tranquil Marsh” throws a beautiful acoustic guitar line over clicks and stray guitar mistakes. The guitar pattern itself would be an incredible song, but the depth it wades through gives it eyes and ears, searching a crowded intersection on a rainy day. “Inside of the Pocket” is another pretty-picked acoustic guitar over echoed strings lodged in the background and a steady cycle of radio static; fumbling for change to give beggars, the song is eerily complacent in its sadness. Closer “Beside a Well” comes closest to the tone and sound of Hatakeyama’s contemporaries, but even here there are plaintive melodies that translate the more familiar patterns into a signature voice that maps out the Chihei environment and his refreshing take on ambient sound.

Minima Moralia is a pretty album, but it is also one with depth, with conflict, and one that, if not filled with overt sonic surprises, is at least brimming with minor accents and stray notes that will set your smile reeling. Hatakeyama may not be the most adventurous ambient artist, he may not be pushing the boundaries of this stuff, but I’d say this album is one of the more tonally consistent albums in the genre, and it’s easily one of the more pleasant. And, you know, it’s nice to have something to put on for disbelievers that isn’t teeth-on-teeth agonizing or beating-heart-dismal; I love that stuff too, but this will have you from its first moments, without anybody needing to explain its little secrets. Gas may have used Pop ironically, but six years later we have the first pop ambient album.