1. Why Is My Sleeping Bag A Ghetto Muppet?
2. We Should Have Never Lived Like We Were Skyscrapers
3. Falcons and Vulcans
4. Virginia, Don’t Drown
5. Collide the Tide
6. I Hope For Tumbleweeds
7. The Architect Has A Gun
8. Get Me Off This Fucking Island
9. I’ll Be Your Avalanche
10. All My Hammocks Are Dying 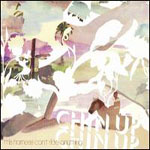 Chin Up Chin Up: This Harness Can't Ride Anything 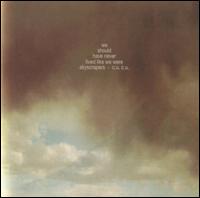 We Should Have Never Lived Like We Were Skyscrapers

Chicago's art-pop scene; the mere mention of it is enough to conjure Joan of Arc, like a particularly throbbing blemish on the backside of your ear that isn’t very noticeable but continues to pain you when you put your head to the pillow at night. It must’ve been the hideous queue of eager polysyllabics or the prolificacy for prolificacy’s sake, but this year’s Mark Twain, Dick Cheney, Joan of Arc almost ruined this whole “Chicago art-avante-[scene]” deal for me. Admittedly, this unfair denouncement of a whole city’s “genre” would have discarded other intriguing bands like Tiny Hairs or the Tundra Survey, both of which take a more meticulously constructed, more patient and, well, more pleasant approach to JOA’s attempt at grand pop movements...but I didn’t care. I was ready to close up shop, tear up roots, sling a few meager items over my shoulder, and adopt a new sonic home.

But here’s Chin Up Chin Up’s new LP, We Should Have Never Lived Like We Were Skyscrapers---and, although it wades through the same nonsensical dregs of lyrical crud that many Chicago listeners may take for granted in this city bloated with wanta-be short story writers, the melodies are subtle and devoutly on point.

Songwriter and vocalist Jeremy Bolen---at times a less confident Charles Bissell, more often a much sexier, demure Cedric Bixler---maintains the lower end of a mix dominated by clapping guitars and a loud, bristling drum kit. Bolen’s place is humbly brilliant: lyrics slurred, often unintelligible, develop a frequently monotonal rhythm as complex as Chris Saathoff’s restrained bass lines. Reminiscent of Appleseed Cast’s Low Level Owl (2001), the subdued vocals transfer a more substantial heft to the melodies that hide behind tricky time signatures and exacting arpeggios. (It should be noted: on Valentines Day of this year, Saathoff was killed in a hit and run accident outside of Chicago’s Empty Bottle, and the Cast’s Marc Young is now his permanent replacement, joining the band shortly after the completion of Skyscapers).

“Why Is My Sleeping Bag A Ghetto Muppet? is a middling initiation, setting a duskish pace to the album that is never really shrugged off until the banjo-licked chamber ditty, “All My Hammocks Are Dying.” A nibbling beat is first twined--maybe wasted--around an unchallenging piano line, but when an elastic guitar bends to a brisk trap kit, the sun snaps blood red from the horizon. Each instrument casts a crisp shadow, parts thrown in violent contrast with one another. When Ruby Newton and guitarist Nathan Snydacker offer their voices to Bolen’s chorus, the pulse of the song flutters, the piano rejoins, and the percussion turns vibrantly organic. It’s a striking dynamic, this sudden emergence of extra voices, a refined, more accessible approach to typical Kranky fare; at it’s best, the arrangements reach the kind of mathematical adroitness heard on I Am The Fun Blame Monster! (2003).

So, when “Virginia, Don’t Drown”steps hurriedly into its back-ended chorus, a crackling plea to the titular state/lady, the effect, jumping from collages of Built To Spill cheeriness to chanted, Robert Smith pathos, is startling. While the last minute of “Virginia" is so successful because of the dynamism of volume and the sheer break-neck resignation of the players to sugary pop, one wishes, simultaneously, for the record to be loaded with this kind of deliciousness, to be sopping wet, feverish with minute after minute of the last minute of “Virginia, Don’t Drown.” Alas! This is an impossibility, because the glory of the moment is created from the restraint of the rest of the song, if not the rest of the album.

“Let Me Off This Fucking Island" reaches a similar high, the Eno keyboard scrawling huge circles around a Britpop invasion of suave choruses and wah-wah power chords. “The Architect Has A Gun,” “Island”’s tempered predecessor, is thicker and more obtrusive than the other nine songs, but the album’s solidity doesn’t suffer; here, post-rock theatrics, so prevalent in Windy City peers, are roped to architectural rigor. From the cherubic noir of “We Should Have Never Lived Like We Were Skyscrapers” to the glam barn-burner “I’ll Be Your Avalanche” and even into “All My Hammocks Are Dying,” stilted with airy chimes, the pace of the album never slips below anxious moments of pause.

In the end, digesting Chin Up Chin Up’s new album is a bit of the ole give-an’-take. Crappy, pretentious lyrics are never truly welcome, especially in the guise of uninteresting vocals, but by burying Bolen’s deadened timbre beneath his amazing melodies and austere structure, the focus of the audience is rightly shifted from obligatory frontman to the thriving whole. Then, as the beat leaps and a phrase turns fervently communal, certain lyrics can be forgiven, even enjoyed, for opening up the end of a repetitious riff or tearing a wall of cymbals in two. One just can’t get the gut-shredding joy of a massive crescendo without measure after measure of careful plodding. Luckily, C.U.C.U.’s got melody to spare, and even the drollest or most boring of Skyscrapers’s stanzas are pimpled with ebullient chops; there’s enough here to keep Tim Kinsella pining away in the studio, sweating the hype, and enough to keep my gunnysack hung on the door. Thank you, I’ll be here for a while.