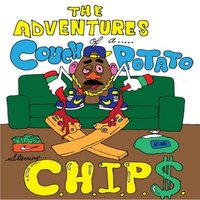 The Adventures of a Couch Potato Mixtape

Chip$ is part of Danny Brown’s weirdly shadowy and heretofore undefined Bruiser Brigade crew, though the first mistake one could make in assessing the merits of Brown’s fellow bruiser is to hold Chip$ up against the Adderall Admiral himself. Brown’s superb XXX (2011) goes down—literally and figuratively—to the depths of sexual animalism on “I Will” and back up to the headier (heh) sociological and economic lamentations of “Party All The Time” and “Fields”; Adventures of a Couch Potato, on the other hand, is pure Id, the cover art serving as an accurate portrayal of the mixtape’s subject matter: a lot of weed, cash in a shoebox, women waiting to be gobbled up with ketchup like fast food, and tongue-in-cheek humor about it all. First song “No Fruits, No Veggies”— like the slurry shoulder-devil to Main Attrakionz’ right-handed “Vegetables”—even begins: “This mixtape contains violence, graphic language, strong drug references with a misogynistic undertone.” That undertone is about as deep as Potato goes.

It’s telling when the most aware, revealing track on the mixtape is “Upstanding Community”: over a dead bass line and tittering drum track, Chip$ details how he’s “in the ‘burbs, tryin’ to stay away from niggas like you,” walking out to the front lawn in his slippers and robe to grab the morning paper, running into a neighbor watering his grass, while the girl he fucked last night is cooking breakfast; someone, somewhere has to be putting together a “Speakers Going Hammer” kind of music video for this song. Unlike Brown, who’s comfortable staring mortality in the face, describing the scene of his death as on “30,” Chip$ really doesn’t want to look any farther than a joke at someone else’s expense and the holy trinity of drinking, smoking, and fucking your bitch (really, dude loves to quantify how much sex he’s having with your partner).

Volatile bravado brings out the best in his delivery, as if he’s building to something violent and concussive, but for a line like “turn your Adam’s apple into apple sauce,” the humor Chip$ exudes is never too far from his loftier boasts. Hopped up on God-knows-what, he points out that fellatio is being performed upon him then grunts with such acidic disregard for whomever it’s addressed to, “Oh that’s your girl? / I didn’t know, did you need her?” It can be funny, but it’s also gutless—and considering Dopehead’s Undertaker choke-slam reference in the aforementioned Danny Brown tape, Chip$ describing taking down a rival with “You think I’ma stop? Nope / Hold his ass down while I jump off the top rope” makes the Bruiser Brigade seem like more of a backyard wrestling tag team than a burgeoning collective of Detroit rappers coming into its own.