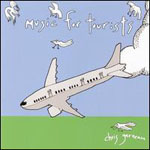 Music for Tourists benefits greatly from its spot in the artist’s discography. Had this been Garneau’s third or fourth full-length offering, the angles open to me in writing this review would have been pared down to one of two dire statements. Depending on the quality of his first two LPs, the tagline of the following review would be either, “Another craven release wafts out from under the bed of an artist without even the imagination to be a sad bastard,” or, “Garneau tries, inexplicably, to slide another album past an unwitting public by hiding his potential behind impotent prettiness.”

But this is Garneau’s debut and, fortunately, the tenets of the sweet, sweet critical science allow me to extend a bit of charitable optimism in his direction, pointing to evidences of promise, however scant. I realize that this sounds like I’m patting Chris on the back reassuringly while firmly attaching the “Kick Me” sign, but the truth is that there are moments on this album that, while not transcendent, evince both his proficiency as a musician and an ear for enjoyable, dramatic piano pop. The experience is somewhat like trying to pick up a game on a radio with horrible reception; there are long patches of aggravating white noise interspersed with seconds of exhilarating clarity.

It seems that Duncan Sheik, the producer of this album, has already managed to impart to his protégé the formula for becoming a forgettable pop entity. And why not? It hasn’t treated Sheik so badly. Half mook, half pop star, he’s managed to slow-strum his way into romantic comedy soundtracks and teen soap operas for over a decade now. “Look, Chris. Pop music is hard. If you don’t want to be Teddy Geiger, you need to make sure that your song’s only manifest purpose is to sound good for the length of time that it takes someone to kiss Katie Holmes.” (Here Sheik grins knowingly.) “They can’t hate your jam if they don’t know who you are.”

So here’s the countervailing advice, Chris, from your other guru: Me.

I know that you want me to hear a spare Sufjan Stevens when I listen to this album. There are two things wrong with this. First, there’s no such thing as a spare Sufjan Stevens. When he strips his arrangements down he compensates with extravagant religious imagery (“To Be Alone with You”) or terrifying universalistic philosophizing (“John Wayne Gacy, Jr.”). There’s always something overblown about a Sufjan Stevens song; if there wasn’t it wouldn’t be a Sufjan Stevens song, it would be, well, you. Second, without that virtuosity in your simple textures, without that florid dementia in your lyrics, it will be tough for you to keep my attention. And contrary to what Duncan says, you want to keep my attention. I’ve become accustomed to watching Sufjan occasionally ride one off the cliff (for good or ill), so imagine, Chris, how tiresome it can be to watch you tiptoe around fifty feet from the edge.

“Castle-Time” opens your album well, the languid strings and rhythmic piano meandering in parallel lines while your falsetto floats in the space between them. The harmonica hits as the lines intermingle for the first time and as they chop jaggedly together my foot presents the early symptoms of tapping. I’ll even forgive that “Let’s cry about it” chorus that would make even Sufjan kick sand in your face. “Relief” is an adequate follow-up despite being a little samey. I’m still vibing with the breathiness while secretly hoping there are more tricks in your satchel.

Then it happens. In the middle of “Black & Blue” when you sing “Oh, oh, I want to catch my death of cold / Because I’m scared of growing old,” your voice is suddenly forceful and clear, ascending with confidence and soul on the backs of the chords beneath. It’s so satisfying that I barely even notice when you retreat back to your wispy default for the last refrain, repeating the embarrassing line, “I wish I was even smaller / A little creepy crawler.” Your stout alter-ego from the chorus appears in “Saturday,” too, singing “If I don’t black out / I’ll keep you inside me,” before adding, “I can’t promise you anything.”

The man from the two previous songs is devastated -- I mean utterly driven from memory – by the lethargic and laughable “So Far,” and again by “Hymn,” and then once more for good measure by “Blue Suede Shoes.” These are the inevitable missteps of a performer whose affectation is “spare Sufjan.” These are the duds where your twee phrasing dissolves into literal whimpering, and it would be conservative to collectively label them as “fucking useless.” If you’re going to make your debut a sedate fourteen-track affair you cannot throw three of them away.

So that’s the explanation of the above score, Chris. It is a direct function of the fact that the downfalls of Music for Tourists are featured more prominently than its highlights. But this is also the good news. You’re a much more capable songwriter than you seem to realize. There is some genuine worth to certain pieces of your work, it’s just that you clearly have no idea which pieces those are. You don’t need to be a soporific Sufjan, Chris; you have more range than that. Anyway, I hope this helped.

Oh, and one more thing. Keep your eye on that Duncan Sheik. I don’t trust him.