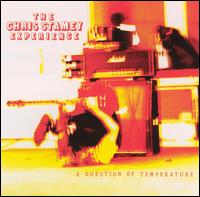 A Question of Temperature

I got so excited about this record. I don’t get overly hopeful about too many new albums, especially by artists I am unfamiliar with, and to be quite honest I had never heard of Chris Stamey prior to receiving my copy of A Question of Temperature. Still, it had one of those press kits that didn’t have to rely on phrases like, “the next Yo La Tengo,” or “an admirable political project.” The latter is applicable, and seeing as Chris Stamey’s “Experience” happens to be Yo La Tengo, the former could have been tagged on, but Stamey’s credentials speak for themselves. Member of the dB’s, producer/collaborator to everyone from Alex Chilton to Whiskeytown, accomplished solo artist: these are the kinds of things that are a pleasure to read on a release after having reviewed one too many albums described as “Elliott Smith meets Radiohead, but with the emotional pull of Sigur Rós.”

The bummer is that A Question of Temperature was too rushed to begin with, and even this reissued version doesn’t much justify itself. As a note of clarification, the album was released as V.O.T.E. with a different order and a few less tracks in October of last year as a get out the vote effort. In light of this previous incarnation a few of the tracks make more sense, but the inclusion of the useless “V.O.T.E. PSA” seems ill-advised nonetheless.

The album’s high cover quotient also gives it the slip-shod feel, especially as they're all grouped toward the beginning of the record. Stamey doesn’t especially mis-step, but then again he’s working with some classics. The Yardbird’s “Shape of Things” bops along happily, and his cover of Television’s “Venus” is spot-on (though I kept waiting for Ira Kaplan to fill in on the goofy backing vocals of the original). “Plainest Thing” is a bit too saccharine, but “Compared to What” comes through strong.

So then we hit the second half of the album: full of originals, or at least remakes of old Stamey songs. “The Summer Sun” is great, though the second version feels like Stamey is auditioning to get a Santana guest spot. The two “Sleepless Nights'” sound like familiar Yo La Tengo territory, if perhaps especially well-produced. “Desperate Man” falls pretty flat lyrically, especially after the album centerpiece, the epic “McCauley Street.” This is the sort of slow-burning track that Yo La Tengo have perfected, and they pull it off especially well here with Stamey on guitar-heroics duty. The whistling, banjo-heavy instrumental “Dr. Strangelove’s Assistant” is a bit odd on first listen, but I’ve grown fond of the pure weirdness of it after a while.

A Question of Temperature makes me want to go out and pick up Stamey’s last proper album, Travels in the South. If Stamey had chosen to go one way or the other--straight covers or an all-out album full of originals--A Question of Temperature would be a much more interesting album. As is it stands, nothing here really captures the imagination, and in the end this probably would have been just as easily forgotten in its original V.O.T.E. incarnation as in this reissue.