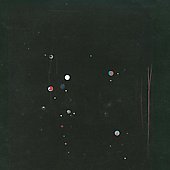 It’s funny that this explicitly minimal-inspired set of instrumentals found a home on the more maximal label Dial, but I guess it makes sense in a way—Dial artists like Pantha Du Prince are just a little Reichian in their approach. Although, calling something “Reichian” is probably a disservice to musicians like Naujoks that work in the shadow of Music for 18 Musicians. That album sort of destroyed minimalism in its own way: the stark cover, title, and process mean it’s this giant behemoth of emotion with no political, personal, or tautological anchors—it’s the sort of perfect instrumental music in that it is what you read into it and nothing more, at the same time that it’s just busy enough that it will support and expand upon whatever it is that you’re reading into it. And there are very few pieces of art I can think of that do that.

An album like this, then, that has descriptive song titles and breaks between tracks, is trying to do something different and, really, harder: to make an album with minimal song structures that avoids the kind of length and repetition we usually associate with minimalism—the exact quality that allows minimal compositions to draw the listener in. I mean, imagine you pulled different segments out of Music for 18 Musicians? That’s kind of what we’re dealing with here, at least for the first half, although Naujoks has just enough sense of tone and space to really make these often brief pieces work well. But Naujoks kind of makes the whole process harder: “Maladies” sets the tone of the album by dialing the Reich influence right to the foreground, and then the rest of Christian Naujoks plays out like bits and snatches of that idea, and the album increasingly puts more distance between itself and that inspirational kernel as it moves on, without ever really convincing me it has solved the problem it presents. And then the final track, which is a kind of hilarious deconstruction of our fascination with songwriting heroes. Of course, it has also produced some lovely examples of the kind of gut-driven reactions that you always get from Dylan fans around the ‘net: I mean, how could somebody possibly cover Bob like this? Geeze—you’d think Naujoks had pulled a Culturcide by the way people are upset. I’d like to introduce you to a band called Brainiac, which this is more about than your precious Bob.

Anyway: Naujoks doesn’t succeed at what he’s attempting here, is the point. Just when you think this is a set of pretty-if-not-earth-shattering instrumental cuts Naujoks starts to sing on “Off the Rose,” and wile he’s doing that you realize he’s covering New Order, sort of, and then…I mean, this album is sort of sneakily schizophrenic. It sounds more like an an EP (tracks 1-6) with bonus tracks than a coherent album, though the ambition here to turf expectations is in itself admirable and appreciated. It’s just that there isn’t, to me, a clear through line that unites these ideas together, nor is there a clear sense of pacing or builds. Complaining about track order is kind of bullshit, since rearranging an album generally still relies on the idea that something is missing, but even if Naujoks had a piece that offset the intense sparseness of piano solos “TTT” or “Bloom” I’m not sure that this would work. There are great tracks here, but beyond the fact that they’re Christian Naujoks tracks, I’m not clear how they’re related. But more importantly, there’s noting on the album that suggests they aren’t supposed to be, either. This album sounds rushed and hastily assembled; the CD itself is held together with Elmer’s and tongue depressors.

Still, the album has plenty of highlights. The lovely and lumbering piano/mallet duet “Idyll” plays on the possible pun in the title; the piece idles and moves, but the various melodies fit together like a puzzle. Both parts of “Two Epilogues” play nicely with string arrangements, the latter featuring a flute, and together they create a continuous space on the album that makes sense, even bookended with the very different “Idyll” and “Off the Rose.” The latter, a cover of “Leave Me Alone,” is the most interesting piano piece here; elsewhere, like on opener “Horizon Scene,” Naujoks does a lot of gloomy chord stuff that just seems kind of Phantom of the Opera ponderous. But “Maladies,” another piano/mallet duet, is pretty, and the first time I listened through the piano that proceeded it made sense. But this is an album that falls apart the more you listen to it, rather than comes together. There’s some pretty ideas here, but not much more.