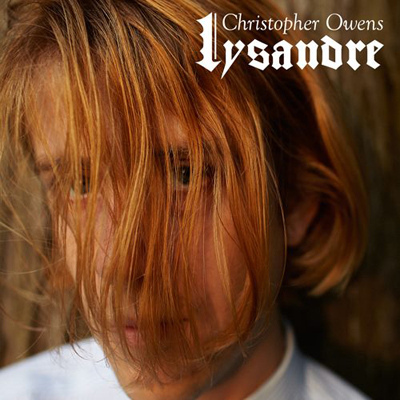 “What if I’m just a bad songwriter / And everything I say has been said before?” This question opens “Love is in the Ear of the Listener,” a dirt-simple tune towards the middle of Christopher Owens’s Lysandre. It’s a common fear, of course, that not being completely “original” makes one a bad songwriter, but it’s also an unproductive one. In a way, we’re all doing things that have been done before, but it takes guts to push past that notion, put yourself on the line, and fully invest in your own point of view. But creating something alive and unique is not easy; it’s not writing in a diary. It involves exposing yourself, and taking responsibility for the way you present your art to the world. So, later in the song, when Owens sings, “Maybe I should sing about how I’m not / Gonna control what comes out of my mouth,” it sounds flip, sure, but it’s also a little worrying. Likewise, the philosophy that the chorus promotes—“Beauty’s in the eye of the beholder / And love is in the ear of the listener”—is a pretty hands-off way to look at creating. And this seems to be something that Owens, adrift in a solo career, is struggling with: he skips hastily through the songs on Lysandre as though he’d rather bury them than show them off, masking meaningful work with platitudes and whimsical sweetness.

When Owens’ band Girls split last year, it wasn’t really clear what his solo career would bring. Since 2009’s Album, the band had been drifting away from guitar-heavy noise and into more complicated arrangements, with mixed results. And on Lysandre, aside from a brief moment in “Here We Go,” Owens is phasing out the noise altogether. Which makes me wonder just how much he lost when he dropped Girls. I’ll admit I took JR White & co. for granted, focusing my attention on Owens, the one with the funny voice and the scared eyes, with the strange and scary childhood and the tendency to overshare.

But clearly, Girls’ success was not all about Owens. Album, one of my favorites of the past decade, is a bold and unforgettable record because of the way the band’s turbo-guitars drive home the pain and longing in Owens’s sharp and simple lyrics. “Hellhole Ratrace” is an anthem for the ages, but without that slow-burning, feedback-laden buzz, it could easily feel too slight and repetitive. When I saw them play live in 2010, the band’s impeccable balance was clear. It was an amazing show, at times earth-shakingly loud and at times downright hushed. Above all, it felt. It was moving. And it’s that forceful catharsis that is, unfortunately, entirely missing from Lysandre.

I’ll be honest here: I hate the flute. I can’t think of a time, in the history of rock songs, that it’s really been welcome. Sure, Donovan and Jens Lekman make it palatable; in Belle and Sebastian it’s unobtrusive. But I can’t think of any flute-heavy song that wouldn’t be better without it, and this is certainly true of the songs on Lysandre, throughout which the flute is a constant nuisance. But worse than the flute alone is the whimsical tone that Owens seems hell-bent on employing throughout the record. “New York City,” a song with lyrics that hint at potentially harrowing moments in Owens’ past, whitewashes it all with a zippy saxophone and cheesy chorus. And elsewhere Owens tries to match content to tone, losing himself in process. See, for example, flute offender #1 “Here We Go”: “If your heart is broken / You will find fellowship with me,” or its hippy-dippy partner “Here We Go Again”: “Don’t try to get me down / Don’t try to harsh my mellow, man.” And the less said about the puzzling “Riviera Rock,” the better. It’s not that whimsy is inherently bad, but Owens is doing himself a disservice; he sounds out of his element and uncomfortable rather than “mellow.”

Lysandre, then, is the sound of an artist who does not seem to know his strengths. There is some truly affecting work here, and tellingly, the record’s two best songs are those that have been gestating awhile. For our year-end coverage in 2010, I wrote about Owens’ performance of “A Broken Heart” and “Everywhere You Knew” (then both called “Lysandre”) on Pitchfork TV, calling them “relatable and heart-wrenchingly sad.” These ballads both have a spark that much of Lysandre doesn’t; they convey a sense of longing for something that once was, and pain that it won’t be back. And Owens’s delicate voice fits them like a glove. “A Broken Heart” hits home with its story of lost friendship—“Nothing like a face to take me back to the time / When it was you and I against the world / Just you and I”—and its plainly stated chorus speaks volumes: “And I wish it hadn’t happened to us / You fell in love with that girl.” “Everywhere You Knew” tells the intimate story of the album’s eponymous girlfriend, a nostalgia-dusted memory with heartbreaking details still intact: “You said you’d never spent the night / Outside with a boy on the grass.” Though less weighty, “Lysandre’s Epilogue” is similarly stirring (and thankfully employs harmonica in place of flute).

Most of the time, Lysandre as a record feels confused and stifled. Though Girls always had a deep melancholy at their core, their best work was almost religious in its ability to turn pain into a cathartic celebration. Even the loneliest songs felt swathed in warmth and redemption. But Lysandre ignores the painful, at times covering it up with an empty optimism that only makes it feel colder. I still believe in Christopher Owens’ talent, but perhaps he does need a band, one with a strong sense of what it wants to be, one to tell him that he’s not, in fact, a bad songwriter, but that it’s all right to control, perfect, and really consider what you put out there. And, God willing, one without a flutist.