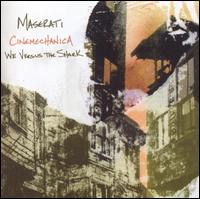 Maserati / Cinemechanica / We Versus the Shark: Three Way Split 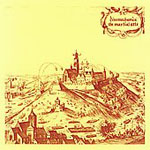 Cinemechanica approach the duty of ass-kicking with the simultaneous solemnity and crazed lust of soldiers who’ve gone section eight. In its inlay and cover, The Martial Arts depicts the title’s Bruce Lee-overshadowed subject, bird’s-eye renderings of 15th century warfare providing both an arc of extreme destruction and a steely viewer detachment, like so much Andrei Rublev. To this band, rock is something dangerous and powerful, an offensive maneuver that demands equal parts strategy and force. In math-rock’s flailing emphasis on the former, Cinemechanica find a misnomer for their attack, one that they’ll begrudgingly shrug at and say, “Okay, so we’re kind of math-rock.” But as much as they are rock scholars, they’re also rock’s FUBAR arbiters.

On the press release, sitting beneath a fat pull quote from Amir’s review of the split EP they did with label mates Maserati and We Vs. The Shark (wherein ol’ Amir calls The Mars Volta a “pack of mewling babes”), Cinemechanica lay down a mission statement. To begin: “Cinemechanica believes in dueling guitars, and by ‘believe’ I mean talk about it, critique it, and collectively lose our shit over it.” Yeah.

Throughout The Martial Arts, guitarists Andy Pruett and Bryant Williamson circle about each other, feint, half-thrust, guard and parry, and all that foreplay lasts about a blink because Cinemechanica are perhaps a bit too eager to get to the part where shit blows up and people die, where those guitar lines become seismic audiometric undulations that level my front room and send guests scurrying for cover. Both guitars want to play lead, and as they wrestle and gnash in the limelight, you get a little tired just watching. I dunno, though, drink another beer or something. There’s plenty of cunning to the brawl, and you can enjoy it on two extremes: shit-eating grin, piss and vinegar fermenting together, or furrowed brow, slipping lens-frames repeatedly pushed back up one’s nose.

So I can say, for instance, that the band’s appetite for filling sound-space is voracious on “Antsinjapants,” where one guitar squiggles a sketch that the other scratches out before doing its own five seconds of frantic doodling as the first guitar scratches that out and squiggles and then already there’s the second guitar scratching and ad infinitum in the lapse of not even three minutes. Or I can say that it kicks ass. With “Brain Tarp” I can marvel at the way incomplete guitar phrasings interlock into a split-level arpeggio that joints up and flexes its robust hook muscle on the chorus. Or I can say that it kicks ass. Instrumental “Get Outta Here Hitler” divides a massive six-step chord progression in half, three crashing reps followed by a quick descent, a fluid line appears and briefly ascends, the tidal wave subsides, the second line sweetly expounds upon itself, and then the wave comes surging back in to sweep out the vestiges it left behind; the effect is catastrophic efficiency. But, really, it just kicks ass. Either way, if Activision’s Guitar Hero introduces a two-player co-op (or versus, for that matter) to the franchise, Cinemechanica’s the band to soundtrack the game’s most devilish challenges. Here’s axe-work that’d have hipsters embarrassed and apologetic as they quickly return, tails tucked between legs, to a Sex Pistols number. Drunken frat boys would be left writhing in pools of sweat.

“Cinemechanica is burned out on the same three tepid indie rock beats you’re burned out on.” Yeah. Except I’m not even sure what beats these guys are playing, other than that there’s a lot of 4 on the other side of the slash. Cinemechanica match their electric onslaught with an unpredictable barrage of time signatures from the rhythm section of drummer Mike Albanese and bassist Joel Hatstat, who do a dizzyingly good job of varying the rounds while also anchoring the ship. I’d attempt a schematic guide to the beat complexity so that we all could slap our knees in wonderment at the precise shifts from 3/4 to 4/4 to 7/4 to 12/8 to 32/15 or whatever the hell it is, but I’m a hip-hop critic, I don’t stand a chance against this shit. Suffice it to say, asses will be pummeled, but they’ll be pummeled with intricate care.

“Above all, Cinemechanica understands the necessity of bringing the motherfuckin’ hooks.” And, once more, yeah. I’m fairly gouged and bleeding here. The issue: “We are students of the game enough to realize that what makes each of those bands [Don Cab, Drive Like Jehu, Faraquet] worthy of complete catalog memorization is that each, in its time, carved out its own signature style of hooks and had its own singular voice; a voice that captivated fans as much for its uniqueness as for the insight it gave into its authors. We hope our voice, in turn, reflects our belief that getting your face melted at a rock show is timeless.” Well, yeah, I have no face left right now, but this time there’s a “but.” That “but” hinges on the fact that almost anyone who has read this review will be able to predict exactly what Cinemechanica sound like, and, believe me, that’s not meant as a narcissistic compliment to my descriptive abilities.

The school of thought most evident in Cinemechanica’s manifesto, and the dichotomy with which they infuse their music, is that of the hard rock intelligentsia, who treat inherently visceral music as something worthy of both mindless love and thorough analysis. In their journals, what may cause a frothy mane of hair to bang is a thing unquestionable yet also recourse for scientific study. I find the current rise of this intelligentsia perplexing and fascinating. Reading Amir Nezar lovingly unravel the musical mechanics of any band on Hello Sir Records, I occasionally feel like a nervous child watching my teacher explain what to do with the scalpel in my hand and the dead frog on my desk. Perhaps the disconnect is that I believe the best music sometimes lets both hemispheres of the listener’s brain partake in the hit, and every once and a while it prods the heart. Williamson’s and Pruett’s semi-screamo vocals and unintelligible lyrics and “Bruckheimer” song titles don’t add much to Cinemechanica’s equation, besides making room for accessibility and maybe offering a more obvious hook for listeners to pin some rage on. I can’t decide if that’s a detriment, a non-plus or a minor positive, but in any scenario, it’s symptomatic of the band’s failure to establish completely their own identity, to achieve the voice that is unique and giving of insight into its authors. A lot of bands have believed in melting faces, and while it’s true that Cinemechanica tackle that goal more studiously than most, intelligently inflecting the incendiary, I don’t know if that’s enough. Still, this is just a debut, and one that shows a band headed somewhere. A somewhere that’s certain to be ravaged by rigorous ass-kicking.