1. Woodpecker Greeting Worker Ant
2. Rocks and Stones
3. This Morning (We Remembered Everything)
4. Tiny Concerts
5. Electronic Diversion
6. Overjoyed [mp3]
7. The Breathing Universe
8. News From the Heavenly Loom
9. Round Again
10. I You We
11. Blasting Through
12. Particle Parades
13. Gold Will Stay
14. The Frozen Lake / The Symmetry
15. Until Moon Medium Hears the Message
16. (Drifts)
17. Signal Morning 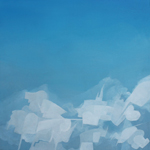 If we ignore intentions—if, as Hendrix once noted, you can’t lie in music—then we’re left with a couple of options: either we explain away a work of art as a product of larger ideological or spiritual forces, or we delve into the artist’s personal baggage. I suspect Will Cullen Hart would encourage the mystical route in the same way, as a critic, it’s so tempting to embrace the latter. What happened to Hart in the eight years since the first Circulatory System album—the kind of wait which suggested that, like Olivia Tremor Control before them, the band was born and died in a single group of marathon sessions? It’s only come out recently that Hart was suffering from multiple sclerosis, a chameleon disease that affected his vision and energy: “It was like someone had a huge, damp towel and was smothering me with it.” Now the man who had sung “Who wants to rise above their chemistry?” (apparently unknowingly already suffering from the disease) couldn’t seem to do it himself.

Circulatory System’s 2001 self-titled debut may not have amounted lyrically to more than a series of hippie mantras, but the result taken as a whole was so much more. The contradiction lay in the fact that, while more idealistic and less left-field sonically than OTC, his new project was ultimately darker and stranger. My old saw on that album is that the lyrics were meant to ease you through the unsettling effect of the music. Now, having gone back to that album after hearing Signal Morning, I’m not sure if I was being prescient or just too stoned (I was eighteen then, mind), since it sounds positively laid-back in comparison to his newest album. Forget the third-person sermonizing and rhetorical challenges, Signal Morning is a lonely, fractured record, a return to the lo-fi noise of OTC but with the former band’s playful surrealism replaced by urgency and even, occasionally, fear.

In interviews, Hart still sounds giddy and creatively-energized (though this might be a recent rejuvenation, with both this long-awaited record and a potential full-blown OTC reunion in the works), articulating ideas more through sounds than words, as is his way, but you can see how—like Brian Wilson and Sly Stone before him—his positivity contains a high potential for burning out. I’m not trying to say his MS is in any way connected to his personality but, as an attack on the nerves, it would surely exacerbate any neuroses. It’s also really hard not to hear his struggle in this album. While Circulatory System started out with a children’s choir and Hart singing “la la la la”s, “Woodpecker Greeting Working Ant” starts out with a huge wall of fuzzed-out guitar and a militant drum beat. When Hart’s vocals finally do come in towards the end, his lyrics are completely obscured by twittering electronics—an effect so densely applied throughout the album that on headphones it can sound louder than any of the current shitgaze/lo-fi bands in vogue.

After the theremin/harpsichord nightmare of “Rocks and Stones,” we finally get our first glimpse of anything resembling the languid harmonies of the debut with “This Morning (We Remembered Everything),” but it’s a tease: about 30 seconds through the Beatles-y guitars shift into something that re-defines the word “jagged” as a musical metaphor, with Hart repeating “It’s about time,” until the whole thing reverts to a deep-bass drone before picking up again. While the debut featured shorter interludes and occasional left-field turns, it was essentially a pop suite: to the extent that “This Morning” works (and it really does), it does so more as a sound collage, with melodies dropped as easily as they’re picked up. Rarely is such pop brilliance conceded so readily. Witness “News From the Heavenly Loom,” quite possibly the greatest 23-second pop song of all time; like a sudden gasp of fresh air, it’s impossible to fully appreciate in the time it takes to play it, which seems to confirm the idea that ultimately the band is withholding immediate pleasure. References to something “very far away” abound.

When Signal Morning does stick to a melody, it repeats it to the point where its confidence tends to veer towards desperation. On “Blasting Through” it’s not clear whether Hart wants to break through to the rest of the world, or bring everyone else inside his. The repetition of what is essentially the same lyric for four minutes could be tedious, but it’s cloaked in some of the thickest production of his career (apparently many of these songs have up to 60 tracks on them, and it’s not at all hard to believe), submerging his voice so deeply it sounds like it’s a struggle to keep singing. A similar effect is achieved with “Round Again,” somewhat of a reprise of “Round” from the self-titled album, but with a shot of adrenaline, the stop-start dynamics embodying the whirlwind implied by the lyrics. “Do you think we can lift this shadow?” he asks, though it’s not entirely clear he knows the answer.

The real nuggets of the album, however, lie in the moments when the inherent melancholy behind Hart’s doe-eyed mysticism comes out: you wouldn’t think a song called “Overjoyed,” which includes lines like “Everything that you say is magic,” would feel so aching, but it’s there from the opening strings, which are layered in such a way to create a subtle dissonance, like Iannis Xenakis creeping into the background of “Eleanor Rigby.” “Particle Parades” is more clearly a ballad—not to mention a staggering beacon of how lo-fi production can be as pastoral as Burt Bacharach—but then the percussion kicks in with fluttering reeds, Hart pleading “Realize.”

If it wasn’t clear that Hart’s obsessions weren’t uniformly tie-dyed bright before “Particle Parades,” then the rest of the album provides a haunting twist. “Gold Will Stay” is a gnarled mess of backwards vocals and Hart offering to give it all up by asking “Could you erase every tape we’ve made?” “The Frozen Lake/The Symmetry” and “Until Moon Medium Hears the Message” find his vocals reduced to a whisper beneath minimalist apparitions that shatter any assumptions that the eight-year wait and multi-tracked madness necessitates over-indulgence. “(Drifts)” has a bedroom intimacy that’s almost voyeuristic for the listener, and while the closing title track restores some of the momentum, it’s final line “To know the way and to have some fun / This is all we want to do” is betrayed by fucked-up tape speeds and electronic detritus.

Which brings us back to the initial contradiction at play here. If there’s more ambivalence than the band seems to let on, if it’s not always evident that Hart comes anywhere near the “new worlds” he constantly refers to, if he’s not really “breathing along with the universe,” does it make the experience necessarily fraudulent and incomplete? For cynics, I’d suggest at the very least, if you can’t read between the lines, to at least accept that the music transcends the lyrics. Better yet, to acknowledge them as part of a struggle to come to terms with concepts bigger than any human being can understand, or as a blueprint of the loneliness and exhaustion of idealism. Or even, dare I say, like we eventually do with all icons of pop music, to welcome Hart’s eccentricity as the necessary driving force behind such vibrant, mind-altering music. And you can’t fake that.