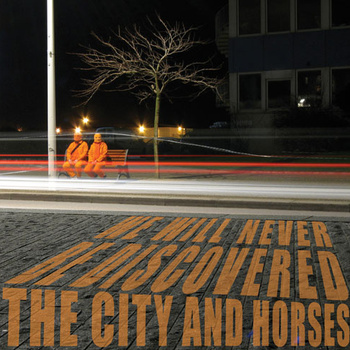 The City and Horses

We Will Never Be Discovered

From the first few lines of the City and Horses’ second album We Will Never Be Discovered, the Brooklyn-based indie band’s unique approach to pop music becomes clear. The title track that opens the record bursts into life with a stomping beat, talk/sung vocals, and destabilizing interjections from flute, synth, and other unidentified mischief-makers. This ingratiatingly off-kilter tune immediately signifies to the listener that this band is ready to reach beyond the twee-pop it wears on its sleeve. The band’s first effort, I Don’t Want to Dream (2009), was a fully realized pop album in its own right. However, singer-songwriter Marc Cantone has pushed further with We Will Never Be Discovered: aided by Katie Costello and Domenica Fossati on vocals and flute, the record has a sense of flexibility which works mainly because it’s rooted in pithy, engaging storytelling, occasionally absurd but always tethered to emotional truth.

Despite the variety of musical styles found here, the themes explored on We Will Never Be Discovered mostly center on loneliness and restlessness. The dreamy “This is Manhattan,” for example, captures the feelings of excitement, unease, and insignificance that the great city can inspire. “Holy shit / We’re in Manhattan / So unpack that grip / ’Cause something might happen,” Cantone sings groggily, admitting later that “Holy shit / My legs do shake.” The country-folk ballad “May I Love Someone Soon” and the darker pop of “Nights Like These,” two of the record’s strongest songs, mine similar territory, this time that of misanthropes alone, often in a dark room. Cantone’s sharp lyrics truly stand out here, as he manages to convey a lot in few words. “May I Love Someone Soon” is ostensibly about being a “monastic creep,” but reminds us that creeps have feelings, too: “Closing shades and opposing parades / Ain’t such a blast.” Likewise, “Nights Like These” abounds with rich imagery, despite the fact that our protagonist sits by himself in the dark: “The power’s out / And all I hear / Are jets and pets and old swing sets.”

While the City and Horses do seem to spend a lot of time brooding (albeit entertainingly), there is an upbeat side to We Will Never Be Discovered as well. “War Paint” is a goofy take on a spiritual, while “The Company, Inc” and “Dum Dee Dum” rely on the engaging vocals of Katie Costello for Belle & Sebastian-style sweetness. These songs are probably the least interesting part of We Will Never Be Discovered, however; though Costello’s voice is lovely in a Regina Spektor sort of way, they lack the specificity and emotion that grounds the rest of the record. Thus, despite their catchiness, they feel detached from the whole. The Cantone/Costello collaboration works much better on the album’s final song, “We’ve Said It Before,” which wouldn’t sound out of place on a Magnetic Fields record. Here the “monastic creep” returns, professing to “never leave the house again,” and this time he has a girl-creep to agree with him.

All the elements that make We Will Never Be Discovered so appealing are captured in “The Tallest Man in the World,” its most fully realized track. Here Cantone’s voice goes gruffer, his verses more Dean Wareham-staccato, his subject matter stranger. Our main character here is yet another lonely figure: the tallest man in the world, feared and misunderstood by all, except when “The sisters come on Sundays.” This refrain, simple as it is, feels something like salvation for an album’s worth of what Springsteen would call “scared and lonely riders.” This thread running through We Will Never Be Discovered is what ultimately gives the City and Horses’ indie-pop heft and life, and though it disappears sometimes, there’s always satisfaction in picking it up again.