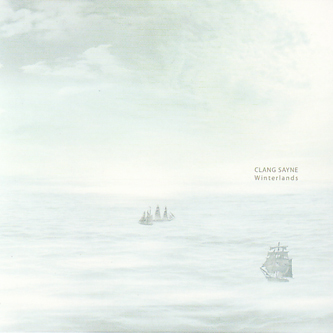 Sometimes a band comes so close to blending the trends which make up my own esoteric tastes that I could swear I willed them into being. Such is the case with Clang Sayne: vocalist Laura Hyland’s evocation of Joanna Newsom and Josephine Foster in her hermetic literary weaving is one thing, the hint at mid-to-late period Tim Buckley (when he started to throw structure out the window, but before he went electric and turned into a madman) and Linda Perhacs slightly more intriguing, but the wrapping of it all in strange textures that subtly absorb improv movements like onkyo, London-based free improv and even EAI—it’s exhilarating, some sort of hermetically congealed whole of all my individual favorite things. My name is Joel, and Winterlands was my idea.

I’d even venture to say at times it even recalls a much looser version of Mark Hollis’ solo album, if I weren’t afraid of Chet standing there, poised to declare such a comparison blasphemy. I’ll add my own disclaimer to that statement: where Hollis slaved over every note, Clang Sayne are at pains to establish that Winterlands was “performed live without edits, overdubs or outtakes.” But the elements are still there: the inscrutable internal logic, the way the acoustic guitar, stand-up bass, and vocals dance around each other, the intrusion of incidental percussive objects, the softer moments when only sudden and intermittent syllables of Hyland’s voice become audible like half-remembered conversations.

To be clear, I don’t really care one way or another if the album was recorded all in one take. It can be mildly off-putting to hear a band brag about it in the otherwise minimal liner notes, but I’ve come to realize it goes with the territory of improvised music. It is, however, the tossed-off-ness of the record itself that will be a deal-breaker for some, though it seems to be part of the aesthetic. “Wistful” barely describes it: let’s just say the constant references to waves and the sea were pretty much a given. The restlessness becomes a rallying cry: on the most climactic track, “Lady Grey’s Allotment” (the album’s genuine Starsailor (1970) moment), Hyland sings “Every ugly alley offers up another lover / Every trussed up trend inspires / And then withers like a flower,” making capriciousness and evanescence into artistic plenitudes.

Songs like “Lady Grey’s Allotment” and “A Ritual to Read to Each Other” offer up some serious mojo—even what can sincerely be called a groove—that provide a nice counterbalance to the softer parts. As good as they are, I wouldn’t argue that writing “songs” is really what this band is about, since the more composed tracks fail to offer the spontaneous creative moments that abound elsewhere. “The Hushed Bud” is mostly pent-up tension, acoustic harmonics resonating over snare vibrations, and yet its horticultural and solstitial metaphors suggest growth and abundance, the vast energy potential inherent in the tiniest origins. On the flip side, “A Death And A Vision,” with its more blatant elegiac qualities, still plays with the most quotidian, incidental rhythms: death busying itself in the kitchen with the pots and pans.

Through all this, the go-to man James O Sullivan—who, if this was all recorded in one take, is clearly some kind of octopede—offers up controlled feedback, prepared guitar and unidentifiable percussion to fill in the cracks. What’s remarkable about his playing—besides the fact that he stands defiantly between songs like “On the Promise of a Blue Sky” and some kind of far less subversive, lounge-y jazz—is that his noises are almost as sophisticated as avant-garde artists who spend a lifetime honing their technique, without demanding anything more than just being another part of the mix.

To be fair, to throw out such wide-ranging comparisons off the bat as I’ve done kind of sets up the listener for disappointment. No, it’s not as good as all those bands put together, nor would I ever expect anyone (let alone an unsigned and unheralded act) to be. It’s just that Clang Sayne, less concerned with innovation than abandoning themselves to what came before, seem to encourage associations—and not just musically, as many of the lyrics are taken from other poets like Anaïs Nin and William Stafford. When Hyland does write her own lyrics she moans, “Hurl this from on every rock / Cast me to the icy depths to join the shipwrecks.”