1. Careful What You Say
2. Journal of Ardency
3. Let Me Take You Out
4. Adolescent Heart
5. Someone Real 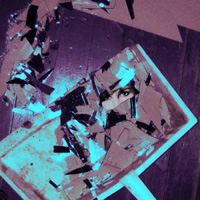 There’s nothing at all sportsmanlike about picking away at a Brooklyn-based electro-pop band. Less wholly derivative of New Order than derivative of those bands who themselves derive from New Order, Class Actress, and other bands of their (admittedly stylish, achingly cool) ilk, can, in our less sporting moments, be described as Telepathe without Dave Sitek’s tenuous credibility affixed; as Junior Boys with Jeremy Greenspan’s silky vocals swapped out; as LCD Soundsystem’s name-check made manifest. In other words, the entire contemporary sub-genre, such as it is, seems so steeped in the most obvious of its precedents that its appeal, however immediate, suggests to the listener a kind of scorn for writing music, for anything beyond that which is an empty signifier—an aesthetic echolalia of diminishing returns. To listen to Journal of Ardency is to identify links in an undernourished sapling of a family tree.

None of this is entirely fair: Harper’s lyrics are solid, her melodies even more so, and that will be enough for most. I’ve spun the title track at least a dozen times without once testing its earnest shell by pinging criticism off it. “Adolescent Heart,” likewise, is sumptuous, layered, a tasteful appropriation of the Cocteau Twins’ polish. And so I’m left to conclude that the band’s hoary predictability, its cliché key tones—which, oversaturated in the mix, getting their retro all over the damn place, could have been the band’s defining feature—are suitably offset by Harper’s undeniable presence. Her voice and charisma act to legitimize an affair that, without Harper, may have been nothing more than a Sofia Coppola trailer waiting to happen. See also the band’s attempt at dynamism in the closing minutes of “Someone Real,” a chug that builds clumsily and is appended mechanically to an otherwise important contribution to the EP’s consistency. Or the song snippet “Let Me Take You Out,” which, in addition to being the band’s one attempt at a traditional band setup (i.e. bass, guitar), is so plagiaristic of New Order as to be immediately disposable. And yet throughout both, Harper offers memorable and creative vocal performances; she simply outmatches this band, damned to first distinguish itself and then immediately pale by internal contrast.

If Class Actress’ full length maintains a similar ratio of hits to misses, they’ll have little to worry about—who can outright pan a solid songwriting effort for its utter disinterest in establishing a signature? Besides, one gets the impression that a band can keep afloat indefinitely in a Brooklyn with a seemingly inexhaustible appetite for this kind of calculated cool, this offshoot chic, however far past its sell-by date. Nonetheless, one catches oneself wondering, out of all of the bands doing this, if there’s an effort underway to capture what essential and contextual adventurism made New Order so enduring in the first place. It’s not the way great artists sound twenty years after the fact that maintains their greatness, but the fact that they sounded that way twenty years ago. It’s true that simple emulation, no matter how comprehensive, is not abhorrent. It’s just nothing to get excited about.