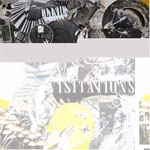 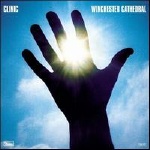 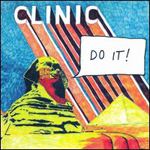 Clinic’s had problems in the past, and here I’ll expose myself to fair accusations of what good writers call Bad Writing, with sounding too, well…clinical. Their early two thousand presence on the art punk scene seemed predicated first on those kitschy masks and then, beneath the attention-grabbing, NME-friendly manner, the ragged edges of barely contained energies. A crescendo was never on the agenda, but that underlying tension was precisely the point. It was electric-flexed muscles and ground teeth that made Internal Wrangler (2000) and Walking with Thee (2002) as seemingly unstoppable as a locomotive, taut as iron, inexorably robotic.

So much more the frustration, then, when Winchester Cathedral (2004) announced that the fine line that exists between nervous vortexes and pre-orgasmic suppression had been crossed, and that Clinic’s apparent starvation was imposed by a poverty of imagination. Early Clinic implied a discographic narrative, and latter efforts abandoned or disproved that admittedly tenuous theory. I once read a story about Clinic fans stealing the band’s surgical garbs just before they were to go on stage—not out of misguided fetishization or hero worship, mind you, but simply to see what the band would do. And who can blame the kids? It was just four years after Clinic’s debut and listeners had yet to see the raw underneath. The masks, like the music, had become duplicity. Clinic’s intentional turn at distancing was a bitter reward for what, in an era of instant gratification, amounts to near-infinite patience.

Their fifth entry, the unusually enjoyable if unambitious Do It!, is a natural curio for a band that many have relegated to the peripheries of retroactive gimmickry. Who would have thought, when they saw those masks staring from the cover of whatever rag validated such ad hock poses, that they’d see the same faces eight years later, staring blankly, wiping context clean? I certainly didn’t, choosing instead to imagine that Clinic, along with the Hives, Yeah Yeah Yeahs, and the White Stripes, would clang their tin cup along the bars of the same cell now inhabited by the once-mighty grunge canon that presaged them.

The album seems to lack an opener, suddenly ends, and loosens what was the group’s tightly-wound structure. “Tomorrow” has the appealing temerity of a Radiohead B-side, and “Free Not Free” dares to dirty up the contrast. “Shopping Bag” is less art than punk, somehow cleaner by being noisier. And though the entire exercise is less exhausting than Winchester Cathedral‘s drawl, what distinguishes “Mary and Eddie,” then, from “Emotions” or “Winged Wheel”? One knows that the tempo and volume at which each song sets out will be the level at which it finally rests. Do It! is about as radical as Clinic seem capable of, which is to say that they finally seem smothered by the borders they’ve set for themselves.

The title then is turned and aimed as solidly at the band—though what It! might refer to is anyone’s guess at this point, might be Anything!—as it is at any other target. For the roughshod aesthetic they try here, Clinic still sound determined to make a home of their dynamically-challenged, Velvet Underground chug. “Coda” is as much a denial of Clinic’s well-worn footprints as it is an affirmation that the next Clinic album will land only a few inches from this or the one before it. There’s little bubbling through the seams or tearing at the sutures, though the following is intoned: “This record is a celebration of the 600th anniversary of the Bristol Charter. A celebration of sheer joy, lapping at your froth.” One can imagine the same words said to the band, in one voice, by increasingly uninterested fans: “…let go of the rail, let go of the rail.”