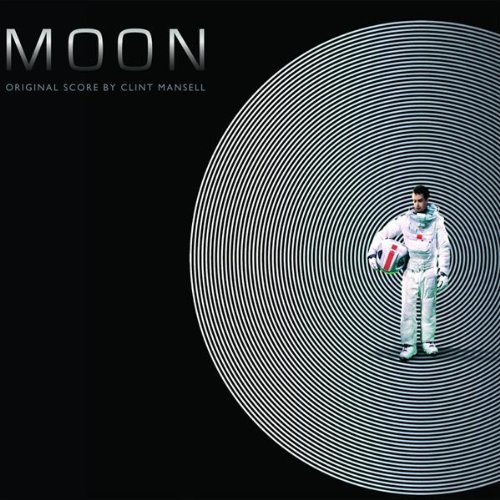 Many people frowned upon Moon as it neared its restricted release: its one-man cast, its lack of CGI, its poster that fucks your TV screen. Musically, the most interesting fact made public about the film was that its director/conceiver is David Bowie’s son, starting out his film career with a picture that could have come straight from his old man’s heyday (lunar engineer unraveling in space, philosophy, optimism, protein pills). What was strangely under-promoted was Clint Mansell’s involvement in the project—that’s Clint Mansell, creator of the most licenced film score this century. Perhaps sympathetic to underdog sci-fi since his rebirth as a composer on π (1998), the former Poppies frontman has with the Moon OST submitted his most mature collection to date, lending Duncan Jones’s debut an appropriate glow of dignity. Films that scrutinize the morality behind lone-worker protocol deserve an operatic piano leg-up, especially in an era of castrated unions where job security’s as obsolete as Betamax.

The film itself is a celebration of Cold War sci-fi: non-toyetic, Martian-free, and all things serious space movies were before Star Wars lit up the box office. Sam Rockwell takes centre-stage (pretty much the entire stage, actually) as Sam, a far-flung contractor harvesting helium on the moon and counting down the last days of his placement. His only companionship comes via a robot/computer program voiced by Kevin Spacey, owner of the most untrustworthy voice in cinema and courting more suspicion with his AI smileys than a priest on a Mac in a sweet shop. Sam daydreams away to the peep of his readouts, forgets to shave, thinks of his family waiting to welcome him back home, and generally keeps out of trouble—that is, until one morning where he comes ‘round in the infirmary to a slow, stupefying shock: there, opposite Bedraggled Sam in the bed stands Iceman Sam, his mirror image in neater overalls, Aviator’d and ready to take over. Something is coming seriously unstuck—possibly linking in with those hallucinations earlier—and can it just be coincidence that the live comms with Earth have stopped working?

So far, Fight Club in space. But the film takes great care to humanise its characters, and it’s here where Mansell’s score comes alive. Looking to the shy piano trickle of “Welcome to Lunar Industries” you’d never expect the emotion he’s stockpiling, not even as that theme rolls into a bounce and fades to match the routines of the protagonist. Mansell’s melodies are as pure and uncomplicated as the film’s intricate model shots, and as the deeper nuances of the plot become clear (I’m saying nothing), the empathy the director and composer are using to make sure their character(s) stand out becomes tactile. The digital quiver of “I’m Sam Bell” is pure bleak electronic, more dark moons than a Pink Floyd convention and the antithesis of Mansell’s Requiem… (2000) hit, while the hydraulic brooding of “I’m Sam Bell, Too…” suddenly blooms, gamely, opening the talons of paranoia. The blank landscape glows, the harvesters spit dust, the earth is just a hole in the sackcloth. If you want to feel like Yuri Gagarin, you’ve come to the right place.

And then the first bars of “Memories (Someone We’ll Never Know”) kick in, and suddenly you don’t just feel like Yuri Gagarin, you are the trailblazing, lonely bastard. As Sam pines for his wife and child while trying to keep it together and stay frosty, Mansell rolls out twinges of beautiful piano modulation, wrapping keys in stellar fog and lingering Cs. It’s everything a good theme should be: understated but sweeping, blistering in the way only heartache can be, and, above all, genuinely memorable. In five minutes flat it cements the mettle of the film, setting up Moon as the missing link in a classified flow chart that demonstrates how employment can crush a mild-mannered drone. The power of this one cut inevitably means it’s recycled throughout a portion of the score, but never in a way that sounds as if Mansell’s hit a brick wall: on “The Nursery” it carves a more tragic angle; on the final blend of “Three Year Stretch…” it only needs a “Previously on Moon” voiceover.

The remainder of the soundtrack is lively and sufficiently orthodox enough to not accidentally alienate listeners with sci-fi hang-ups. You’ve got the appropriate frantic strings of “Sacrifice” that set up Sam’s spanner-in-the-works act, the double-edged kick drums of “We’re Going Home” as things get a little bit action, and even a drone accompaniment for the peripheral gore scenes with “Are You Receiving”‘s creaking scrap. Mansell calmly pulls out all the stops and gives us a sophisticated cross-section of his skills, making Moon not just a score that’s at Oscar hopeful but an album no Sigur Rós fan should ignore. On screen his music decorates a fitting swipe at corporate hubris; grounded it’s a tale of identity, sabotage, rebellion and despair I never thought USA 2009 would dare produce; and when heard in isolation—particularly when measured against his kinky swagger fronting Pop Will Eat Itself—Mansell’s cues are defiantly noble, eschewing the techno producers call him up for and instead playing weightless keys. If they’d mixed this set into Transformers 2 its Metacritic rating would sky-rocket; as it is, it’ll keep quietly amassing the Last.fm hits ‘til a big shot needs something for a cancer scene. I prescribe all fifty-five minutes.