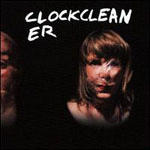 This record has provided me with a large amount of entertainment. On the outset it sounded crazed and demented, just a bit too random. Like the band wanted to piss off their parents, crash every party, blow every amp. And, yeah, there are points on Babylon Rules where Clockcleaner come off as prematurely singular -- different, sure, but held back by their need to be at odds, their furious commitment in crashing every possible plate of white noise, in leaving that debris in the offal juice of some mangled effects unit.

This is not, obviously, radio music: cursory listens won't locate the mechanics here, the driving impetus that propels these songs and pushes them out of their skin. This is a record that will sit there and stew and wait for you, the listener, to afford it some proper attention, the kind of all-ears treatment that every band secretly wants but pussies out of commanding through popular designs and fashionable hooks: that is the attention Clockcleaner demands here, the challenge it has set out. To listen and to understand that this isn't just fucking noise, or some grab-bag hustle of punk rock riffs.

These are angry, clattering and murderous head-rollers -- all brutal and fundamentally fucked, blasted out into the gutter, their shards of serrated feedback kissed and caressed with relish, or a sort of tender loving care. All through Babylon Rules one hears not only nihilism but also a redemptive sense of belief. The band play with something more than just blind passion, hitting at an interpersonal telepathy that electrifies these songs and makes them come alive. Take single "Vomiting Mirrors," for instance, where a relatively stable rhythm section manages to keep in touching distance of spazz guitars and derailed keys, the whole thing coming together through counterplay and sonic indents. The cumulative effect is both startling and subdued, seething where a lesser group would have spewed, not so much curtailing individual elements as allowing them to stew.

The level of playing is basic, but this simplicity is subsumed by investing itself with annihilation: the feeling that the smooth bass of "Caliente Queen" won't last the chorus, or the knowledge that the surf rock riff on "Daddy Issues" is going to shatter the windows of the nearest fun house. This dynamic tension is built bottom-up, right from the individual performances. There's something exciting, for example, in the saw-toothed grit of John Sharkey's voice (regardless of the random crap he shouts), or the almost disinterested way his guitar chugs along before lunging out at you with spiralling lines dissent. These lines -- neat, quick, direct -- sound clinical, antiseptic even. Their scabrous effect comes with the timing of their deployment: in the middle of a rhythmic switch-up, or cold-blooded out of the red of the mix. The first track on this record is called "New in Town": Clockcleaner want to knock you out.

The stony drums, the relentless minor chords, the creepy echo that's just plain guitar wank but cures all empty corners -- all this is bundled and rippling on Babylon Rules, less a statement of intent than that statement manifest, balls-deep and howled in a voice of thunder. It doesn't sound cool, cocksure or arrogant: it eats these descriptors up, chewing and lacerating them, elementally abusing their meanings before barfing out the charred, acid-fried result. This is not music that can necessarily be judged on merit. It is indifferent to rubric, superior to the score. Clockcleaner, in other words, know how to tear it up. These eight tracks mount the invasion.