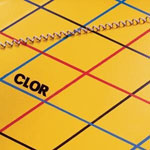 So, a friend of mine, let's call him Alex--fitted out in hipster attire, skinny indie tie, the works--told me he'd got Clor's eponymous debut album, possibly due to a positive review he'd read in that week's NME.

Alex: So… do you wanna come over and listen to it?
Me: To the Clor album?
Alex: Yeah--they did that AMAZING single "Love and Pain," you know?
Me: I know.

"Love and Pain" was enjoyably aloof in its marriage of disco squelches and belches of hypertensive Wire(y) guitar chords, but by second single "Outlines" --replete with more of the same systematic senseless, albeit without the joyous, Freddy Mercury inflected highs of before--I had written off the band as a one-hit wonder.

When I told Alex this, the indignation toggle switch on his face was flipped, and before I knew it, he was off quoting how Clor was the "fervour-fuelled fusion of Devo and Kraftwerk."

And that's when I decided I wouldn't mention either Devo, or Kraftwerk, in this review.

So Alex revved up his CD and for the next 50 odd minutes I was listening to not only Clor, but Alex's very own pearls of wisdom, the best of which I have compiled here:

"Good Stuff"  is… it's like a robotic version of the Killers, but check out those truncated beats, they're so… damn, did you hear that synth part?!"

"This album's so weird- what's that experimental stuff you listen to? Kid A? This is like Kid Alphabet man, it's so much more expansive. Righteous!"

"This is the equivalent of a thinking man's Bravery"

The album finished, and before you knew it, he spun it again, so this time I started taking notes, and as the final toybox synth melody of closer "Goodbye" faded out, Alex's voice cut in:

I looked down at my notebook and I read what I'd written:

"It was bound to happen sometime.

Kids of suburbia, sickened by the straight faced retro shtick of bands who would rather pilfer the past than innovate, have been waiting for the new buzz band, as top shelf music marauders clamour to be the ones to dig out this sound and spoon feed it to the kids.

Enter Clor, five (un)likely lads from Brixton, formed from the dark recesses of Roots  Manuva's backing band, who, unsurprisingly, are not innovative at all. Indeed, like their retro revivalist peers, they spew out spastic riffs with a greater emphasis on synths. The other, more fortunate surprise is that Clor are a melodically superior group, with obtuse chord changes and sharp pop hooks. Like how the hardwired twin guitar line of "Stuck in a Tight Spot" recalls the Dismemberment Plan, or the Cars/Rentals references throughout the po-faced parade.

Problems arise where the tentative balance between all-out weirdness and tunefulness is lost, the pendulum swung too far up melodically sterile paths so that songs like "Magic Touch" and "Garden of Love" are nothing more than a series of odd time signatures and Gameboy gloops and whoops. Much like Beck's Guero, actually, except where that album's effortlessly cool post-modern lyricism was its saving grace, couplets like "I've been gifted but you'll never know / I've got special powers beyond your control" mean that where the band lacks  melodic flair, all that is left are a series of forgettable, uninspired dirges.

The token downplayed ballad "Gifted," as with much of the rest of the record, swaps conviction for composure. The delivery seeming forced, as if the group were being weird for the sake of being noticed, rather than due to any artistic calling, rendering these eleven songs--musical glitches and all--absurdly anonymous.

Although they have some serviceable indie disco hits, Clor are merely the latest production line band to explore a niche in the market, though their attempt at nerdy, computerised post punk rubs one off as a flawed blend of, of all things, The Downward Spiral and Zwan. Obscurity awaits them."

Alex stared at me. He then played "Love and Pain." I left the house before he started singing the chorus.