Other Records by Coachwhips 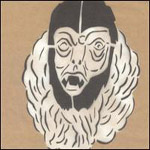 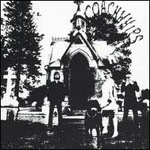 I know what you’re thinking, intrepid CMG reader: net-savvy, plucky lad that you are, you’re searching the internet in a quest for something new. You must be saying to yourself, “why is CMG covering an album that’s so…. January?” You’re out for fresh blood. You want to be the first kid on the block to drive home a shiny new record. Hey, it’s understandable, no one wants to be scorned for buying an album in July that came out in January.

But this is different. This is Coachwhips. They rocked.

That’s right, rocked, past tense. They just broke up, you see. Peanut Butter & Jelly Live at the Ginger Minge was the Dwyer-led trio’s final scorched transmission from a sort of alternate universe of searing rockabilly and UFO punk. Apparently, Dwyer has opted to focus on his side project of a side project, OCS (read our review of 3&4 here), leaving Coachwhips fans with melted faces, frayed hearts and possibly too much unfocused aggression.

While not a live album at all, PB & J does indeed live with its own throbbing, messy scariness that demands that the volume be turned all the way up to 11, threatening to eat your brain if you dare leave it lower. Starting with a tumbling riff and exploding into a damaged anthem, opener "Body and Brains" contains all the elements that are present in almost every Coachwhips song: Dwyer’s distorted vocals sung through a mic apparently made out of a stolen hotel room telephone, fuzzy guitar blues riffs played at least twice as fast as the recommend dosage, bleating, screaming keyboards and furious, clattering drums that sound like they probably won’t make it to the next set in one piece. Every song is a dangerous concoction of the above, played fast and loud. This is a good thing.

“I Made a Bomb” enters the fray with thudding drums and a droning key effect that sounds like a '50s spaceship. Coachwhips has many elements like this that somehow summon the past, but don’t feel contrived at all. “Ya No Ya Wanna” continues the withering assault with a driving three-chord riff that’s so simple, it shouldn’t sound so good or seem so fresh. (It does and it is.) Meanwhile, “Your Party Will Be a Success” has to be the longest song in the Coachwhips songbook at just over four minutes. (Most others clock in around ninety seconds, few pass the two-minute mark). Featuring a simple VU-style keyboard and a beautiful distortion-heavy guitar riff, it is a fitting way for the band to ride off into the sunset.

Coachwhips played their last shows in Brooklyn last weekend and hung up their damaged guitar, battered drum set, hammered keyboard and homemade mic for the final time and called it quits. And they deserve a moment of silence, dammit.