Listen to tracks on their Myspace 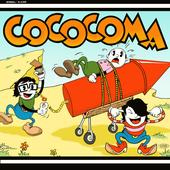 CoCoComa is an up-and-coming Chicago three-piece that plays brisk garage punk with ultra-compressed cymbals, vaguely taunting organ lines, slowly trilled choral phrases that could be hiccups but mostly sound fucking energized in the moment of the repeated vowel syllable, and a cartoonish awareness of their plaited influences so immediate that the furious farts shot out the other end of their debut LP could only be straight-forward, even shameless, hybridizations of, say, the Monkees, the Ramones, Paul Revere and the Raiders, and then, because region is important and veins of kin bold, typical Chicago art-pop. And there you go; go buy the record, knowing what you’re in for, because the following will not assert why you should like said type of music if you don’t, nor will it energize your faith in said music if you already possess said faith. CoCoComa is a loud, pumping album about loud, pumping emotions, as shallowly declarative as loud, pumping stuff should be. It’s plenty loud and it pumps well and it’s all there bubbling on the surface, instantly available in one go-thru. Twenty-eight minutes, you’ll see, is plenty enough time to, ya know, get this.

Not that there’s a whole lot to, ya know, get. What’s meant to be said is, and whatever that is, whatever blissfully brief notion of dissatisfaction or frustration or confusion that can be implied through inchoate miasma and farfisa, is stated as empirically as possible. Just as the surf lick that opens and ignites the album is both sign post and welcome mat, the gauze of cheesecloth draped over each of the ten tracks is never a calculated affectation, just an exigency of being loud and pumping. And of being a throwback, not necessarily a revival or a refreshment, because the band fits the bill pretty staunchly: sure the Ramones are an easy ground zero to cite, but CoCoComa passes giddily through the lineage of the early 60s garage rock that morphed into proto-punk and Detroit detritus and grunge and heads straight for the unabashed homage; that the cover art for their LP and previous EPs (crafted by lead vocalist and drummer Bill Roe “with a generous nod to Bob Zoell”) is so obviously a high-five to early Disney cartoons or Katzenjammer Kids comics or, um, Lil Lulu is just more ostensible evidence that CoCoComa is indebted to the core and not to the paradigm. In other words, their nostalgia is more Art Spiegelman than Iggy Pop.

Which is just fine and dandy, really. “I Swear” seems to swerve recklessly through staccato bleats, faux English accents, and impatient growls from Lisa Roe’s guitar, losing control in a solo that could bend a steel bar in half because of sheer screeching heights alone, and then stops on a dime. Similarly, “(Tryin’ To) Read My Mind” kicks in with a rushed paradiddle that only flees into a bone-white din as a matter of the drumkit’s nature, call-and-response with the rest of the band ending down the road of the chicken and egg debate. The codpiece of the album, logically, is “Premonition,” all acetylene torch against wood beams and then a chorus as sing-ably likable as the band’s ever bound to hatch; Bill Roe hollers, “Got a premonition, I can feel it in my bones / Girl, I get the feeling if I call you won’t be home,” while Mike Fitzpatrick’s organ cuts trenchant orbits around the undermixed vocals. Each track, then, offers space for one of the three band members to rip, squall, and subsequently crash headfirst into the rest of the outfit. To call the band tight would be trite. Stating that Bill and Lisa are married just sounds like a necessary formality; CoCoComa is attached at the hip, fused at the borders of their respective pain thresholds and smiting out a debut record that absolutely sweats.

Couple that with the “generous nod” to the forebears of their sound and CoCoComa is a record begging to be run to, climbed to, moved to, destroyed to. It’s a record begging to be used, an exciting means to an end where the end is just a reciprocal justification of the means. In that sense, the fact that they’re rehashing a type of music already rehashed endlessly for the past forty-plus years means nothing because their timeline’s already folding in on itself. That they’re also on Goner along with a bunch of Jay Reatard’s old junk and some King Khan stuff should be enough to affirm even further: the past is still alive, everybody, so get used to it.