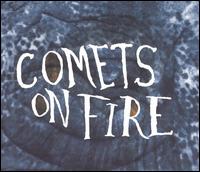 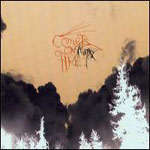 Six months ago I was privy to an ongoing email conversation between ESPN.com pundit Bill “The Sports Guy” Simmons and pop culture wonk Chuck Klosterman. Within said exchange, Klosterman expressed paranoid concern that the major television networks were no longer gearing their programming to the public at large, but rather him and him alone. In support of this hypothesis, he pointed to the show where Dave Navarro is enlisted with the task of helping to find a new singer for INXS and Survivor: Guatemala, apparently deemed Chuck-worthy for contestant Gary Hogeboom, second-string quarterback for the Dallas Cowboys throughout the first half of the 1980s.

I mention this only because I’m beginning to think a similar phenomenon may apply to rock bands as well; in particular, my relationship with all outfits fronted by Comets On Fire frontman Ethan Miller. You would be hard pressed to find a record more specifically “Goldstein!” than Comets On Fire’s 2004 release Blue Cathedral, a psychedelic monster of a rock album that purposely called to mind all of the awesome LSD-driven bands that populated Bill Graham’s Fillmore venues in the late ‘60s and ‘70s.

And further, many a night I have lain awake wondering aloud what Comets On Fire would sound like if they had employed an acoustic guitar for the purpose of covering the entirety of The Very Best of the Doobie Brothers (1993). Like a genie granting wishes, it’s been two months since the release of the debut record from the Ethan Miller-fronted Howlin’ Rain, which essentially sounds like, well, Comets On Fire with an acoustic guitar playing nine variations on “China Grove.” Mr. Miller has wired himself into my brainpan. Rumors of a Miller-led song for song cover of Hendrix’s 1970 New Year’s Eve show with vocal contributions from members of the ‘86 Mets are unfounded.

It’s unlikely that I’m going to hear a single song all year that will garner me more aural pleasure than “Roll On the Rusted Days” from the Howlin’ Rain LP, but for now I’ll concentrate on Avatar, the fourth full length release from Miller’s main squeeze, and a wholly satisfying document in its own right. Though an unquestionably mellow affair when compared to Blue Cathedral, it’s easily the more accessible of the two, and in some ways more versatile; its subdued nature makes it far less likely to annoy the upstairs neighbors, and/or uptight parental units. That could not have been said about Blue Cathedral; barring a track or two, the modus operandi was sheer chaos. The listener could occasionally pick up an in-song benchmark in the guise of a repeated riff or phrase, but the album sacrificed discernible melodies in favor of appealing to the manly-man desire of rocking extremely hard via endless guitar solos and drum fills. Vocals too were mostly an afterthought, with Miller’s Ian Gillian-esque caterwaul being simply another unintelligible noise thrown into the dense mix.

Avatar, on the other hand, comes with a full lyric sheet, and now the vocals are mixed high enough that you may not even need to read the insert to understand what’s being said (unsurprisingly, D&D-style gobbledygook with myriad references to fire, “ashes drippin’ like water down a drain,” and the perennial Miller favorite, “sons and daughters!”). Further still, Avatar contains honest to god power ballads with legitimate chorus breaks and climax points where Miller gooses his vocals with that little extra to signify when to hoist your lighters aloft.

A prime example is the last minute of “Lucifer’s Memory,” where Miller, now oddly sounding a little like Chris Cornell, hollers “Goodnight to century! / Farewell to amnesty! / Christen my sons and daughters! / Let it burn / Let it Bleed!” over gnarly sustained guitar, thundering drums, and a somber piano riff. It’s a textbook classic rock moment ripped straight from Zeppelin’s untitled fourth, and undeniably effective, even if it is far more conventional then what we’ve come to expect from the Comets. Second power ballad “Hatched Upon the Age” attempts a similar trick, and while not quite as convincing as “Lucifer’s Memory” it still manages to end Avatar on an appropriately epic note.

Other tracks make good on the madness that most were expecting. “Holy Teeth” could actually be the most chaotic track of Comets On Fire’s career, a three-minute rave-up so deliriously abrasive that it would pass for a Blood Brothers track. Elsewhere, “Dogwood Rust,” “The Swallow’s Eye,” and, to a lesser extent, the jazzy “Jaybird” will all satisfy listeners eager for the extended psych-rock dissonance of Blue Cathedral’s best moments. The only obvious stinker is the appropriately titled “Sour Smoke,” a bone-stupid repetitive march that screams, “fucking around in the studio while stoned.”

Despite Avatar’s reliance on more conventional song structures and vocals, there’s still no debating the fact that it’s distinctly a Comets On Fire album. Their enormous sound and bottomless bag of guitar and drum solos all remain intact, as does their psychedelic fuzz, suggesting that they would have sold more records had they been around thirty-five years ago. Ultimately, Avatar’s change in direction is hardly an unpleasant one, partially because it’s really fun to lip synch “Let it burn / Let it bleed!” while playing the air guitar on your knees, but mostly because it still rocks frighteningly hard.