1. How the Cup is Being Filled (Now)
2. Spiders in the Moat
3. Sullen Lamplighters
4. The Triage Nurse
5. Palace (Exterior)
6. Power Lines 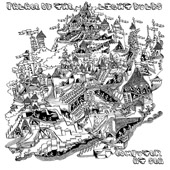 Palace of the Lightbulbs EP

When Owen Ashworth aka Casiotone for the Painfully Alone announced he was hanging up his keyboards last year, hundreds were ready to jump in his shoes offering theatrical loneliness and Alesis XT Reverbs. Well, there’s no one better theatrically equipped than the understudy, so Casiotone support act Computer at Sea feels like Casiotone’s natural successor. Not only does Galen Richmond share Ashworth’s knack for addictive, bittersweet melodies, he’s also a technical whizz when it comes to analogue equipment (we’re promised whole songs built from nothing more than handmade synths, greetings cards, and modified answerphone circuits). What he differs in is his specific definition of “painfully alone”: while Ashworth created damaged characters and subjected them to romantic devastation, Galen Richmond audio-tortures reserve firemen, tearing up keyboard demos with cutting edge glitch sequences. He could even be an Ashworth character run wild and given a spin-off—the scowling, porch-based, varmint-shooting widower who opens fire on charity collectors, then goes inside to cry over photos of his sweetheart, and then finds an old moonshine recipe and lights up his neighbourhood like Libya.

Terrifying everyone instantly with a blast of loud ’80s static, Palace of the Lightbulbs‘ opening track serves as an introduction/warning to Richmond’s world, regaling you with stories of perverted ambulance drivers—and what sounds like the After Burner arcade machine being crushed and compacted to death. If you thought CFTPA had a dirty mind, just try this: “It’s measured in the flames from the burning couch / Just how badly we have disgraced ourselves now / And when we’ve got to give mouth-to-mouth / We’ll make a big show of how we’re not aroused.” The glum melodies and serrated percussion constantly fight for top position, leaving you unsure as to whether Richmond needs hugs or restraint in a safari net—or, as his band name suggests, whether he’s simply an impossible amalgamation. On “Palace (Exterior)” he makes old circuits growl like the rough end of Warp Records, while “Spiders in the Moat” sees him attempting “Three Blind Mice” on broken medical equipment. By the time it reaches its mix of dial tones and alien restaurant music, it leaves no doubt Computer at Sea has gone totally stir crazy. Too much time in the ocean can do that. He’s obviously been gas-fucked by Roy Scheider.

But, like every hermit experimenting with home explosives, Richmond often displays some genuine emotion, albeit in the guise of more attacks on public services. “The Triage Nurse” uses gibbering computers to salute nineteenth century rescue techniques, all mercury vapor and crepitus tests. “A cursory feel but the hands have been broken / She’s certain they’re broken,” he sings, possibly still sore at an unnecessary plaster cast he was forced to wear in his teens. He holds his tune comfortably, though, making the track sound like the Tragically Hip being sucked into a remorseless jacuzzi. It’s probably the most moving song you’ll hear about manta-ray protein poisoning. Aside from this, the vocals go a little more sour, recounting more examples of the dangers of maintenance workers being squeezed by top-heavy management: “The conductor wires the electrical fires / To a burning bag of garbage and the radial tires / They roll through the holes and all the cynical liars / Who faked the grand standing that they’re workmen-compliers.” The percussion effects grind like warping metal. “Brakeman’s Blues” it ain’t.

Palace of the Lightbulbs shows that Richmond can devise a coquettish little pile of psychosis, and one which at twenty-two minutes is a good enough primer for an album. You’ll just need a lot of hate in you to fully appreciate it, as well as a strong palette for pop tunes. For example, if you like the Drums but really hate Converse Allstars—and I mean really, really hate them, like you’ve written your own Sinclair adventure where you get to flamethrower the factory—you’ll love Computer at Sea. They produce the most anarchic, batshit bedroom electronica you can make without being in a bedroom that’s still got a handle on the door, and where your meals aren’t brought to you with crushed-up tablets in the gravy. The only problem is, is anyone that messed up by modern living that they need to dance to rearranged fax music? Can “We’d like to say that we’re not gonna pay / But our wallets always open for you” ever be a chorus? I hope so, and as “Power Lines” skids to a sticky halt hopefully others will be asking the inevitable: if this is what Computer at Sea can do with old Tascam TEAC 2340, what the fuck’s he going to make of the iPad?