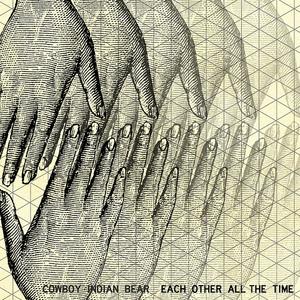 Each Other All the Time

Consider this review a synechdochic addendum to my Where the Wild Things Are Daily Ops post. The second track of this record is really cute and jangly and features, of course, glockenspiel. Plus, the title has an explanation point. So there’s nothing about the presentation, packaging, concept, or general aesthetic of Cowboy Indian Bear’s full-length debut Each Other All the Time that would make you think of it as anything other than “just” indie rock. They are a three-piece from Lawrence, KS on Kansas City indie label Record Machine where the lead singer has curly hair and sometimes wears flannel, their bassist has dreads but mild, not-too-Rasta dreads, and the drummer’s equal parts talented and bespectacled.

Their music lives at the intersection of Grizzly Bear and Hot Chip, and although just typing that makes me gag a little, it turns out to be a good mix; they indulge the former’s affinity for reverb guitar, vocal harmonies, belabored arrangement, and standing pretty still and the latter’s fetish for up-front melodies, programming both percussive and tangential, wry turns of phrase (“I am a tribute to myself” begins the fifty-second “Tribute”), and mild body-bobbing. But where the concerted ambitions of Grizzly Bear and Hot Chip lead to a sort of quiet pomposity and a nebbish dance shtick, respectively, Cowboy Indian Bear’s only apparent ambition is to be a good indie rock band. Thus, Each Other All the Time is an effortless arc into a clear blue sky, a frisbee throw of a record, a pleasure as tactile as long, cool grass between your toes and the slap of plastic between your palms. Go ahead, put your corduroy shorts on.

Which isn’t to make this shit sound insipid. The percussion whirs and multiplies, the guitar leads lap up any brief chances they get at distortion, the bass is funky (but a mild, not-too-Rasta funky), and when everything clicks around an indelible melody, as in the churning coda of “Santiago” or the sweet electro-pop of “Heart Be” or the distant, polyrhythmic swell of “Color Well,” there’s a distinct chance of getting caught up and a cumulative likelihood of feeling like you’ve been swept away. I think that may be why I started listening to indie rock. I’m not sure, I don’t remember. And that’s fitting to the closest approximation of an abstract reading I’d throw at this genial record: it sounds like a half-remembrance of snapshot moments and tiny yet not insignificant joys once forgotten. It’s “Memoirs of an Indie Kid (Before I Discovered Rap and KFW).” It’s a girl I met in Chicago, right before Pitchfork Fest, who was named after the song “Maggie May.” It’s that one time at the Virgin Megastore listening station where your first encounter with Death Cab was the beginning of “Title Track” and how it sounds all lo-fi and four-tracky and then Chris Walla kicks it into super studio sound after the first verse and chorus. And then it’s remembering that you once thought that was cool. The beauty of Each Other All the Time is that it is not those things and it supersedes them because while it recalls what you were it’s fully with who you are now. Which, for me, is a guy in his late twenties who’d always rather listen to OutKast or Supersilent but will give a straight-up indie rock record the time of day if it is simply good enough. And Each Other All the Time is simply good enough.

I could be investing myself deep within the reaching verbiage and state-of-underground-hip-hop implications of the Black Milk record review I need to write for next week, but the great thing about a record like Each Other All the Time is that it is what I listened to in the car today and I can do that because they sent me an actual CD, not a secretive advance stream, and this is just one little signifier of many that bespeak the kind of modesty that only asks for some modest press. I can just give it a thumbs up and throw a few references at it and that’s all it really wants from me—that and to be enjoyed. There’s something disarmingly endearing and noble in that humility, something that keeps you listening, and as you keep listening your enjoyment grows. Each Other All the Time is the kind of record that recognizes its fleeting encounters with grandeur but does not live for them, just puts them in relief and carries on (a Youtube video or two attest to opener “Madeline” having in live form a couple minutes of shoegaze jamming that are sharply excised here). It’s the kind of record that recognizes the inherent dopeness of fat bass and kinetic backbeats and synthesizers but doesn’t view that stuff as shit that an indie band has to use in some misguided and ultimately misanthropic attempt to get white people dancing (“Bear vs.” motors on a groove built purely for its own momentum).

Basically, it’s pretty smart stuff that knows its place. It knows that inventive doesn’t have to be experimental and that pleasant doesn’t have to be boring. It knows that a winning disposition goes a long way and winning musicianship even longer still. It knows how to rock a glockenspiel. It knows a lot of things that indie rock is supposed to know but seems to have mostly forgotten. Or maybe that’s just me. But I’m ready to accept this particular record, at least. It’s just indie rock and that’s just fine.