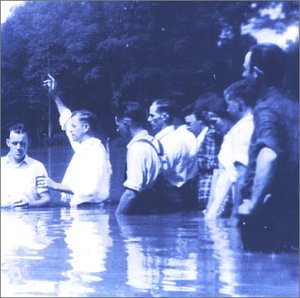 This second all-covers EP laid down in the eight year stretch of shadow cast from Reservoir Songs I is less the evocative pulmonary punch its predecessor was and—this breaks my heart to say—more of a nice, toasty snuggie for the soul.

Even after the clawing punk-aggression of Archers of Loaf simmered down in the soulful pace and folky, heartfelt direction of Crooked Fingers, frontman Eric Bachmann has been wielding the same gravelly rasp of a voice that even managed to wring an unsettling amount of pathos from Neil Diamond’s “Solitary Man”—suspended as it was, for the most part, solely over a raw toil of banjo rolls and slow, controlled belches of brass. And with that kind of vocal drive and potential in mind: this is an unusually mild and upward-facing collection of cover songs. Comfortable. Soft. Mellow. Really, really fucking mellow. With a notable embrace of “bleep-bloop” noises and an all-out absence of banjo, clang, and folk-ish clamor.

Right from the first song, “Shelly’s Winter Love,” Bachmann’s reversing his former EP’s tactics: instead of providing a country-ified, stripped-down version, it’s all soothing synths and bundled-up, smooth blankets of textures where his voice retreats almost entirely. In the best moments (and they are very nice moments) it brings to mind “Sweet Marie” from Red Devil Dawn (2003). But without the “glue-sniffing,” “pussy-bastard” lyrics and fervent enunciation to contrast, it just winds up taking the song’s woes and instead of spelling them out in vocal barbed wire, lowers them to steep in a steaming cup of warm, electronic-beat-infused Sleepytime. On the other end of the scale, Hartford’s “Gentle On My Mind” is whittled down almost to its detriment–-again, this isn’t because it’s simple, but rather because it’s been stripped down to a complacent bubble and flow of unphased lyrics and guitar with shaker shakes moving it along its mellow way. Continuing to water down this warm concoction till smack in the middle, with Thin Lizzy’s “Wild One,” where pretty much every trace of emotional charge has been shooed out and replaced with this half-present contentedness. My heart basically put down for a real nice nap, it’s an unexpected time to be suddenly roused by the brightest takeaway from the album: “Black Rose.”

A blooming palette with plenty of breathing room that pulls you in and out of its sad bellows, “Black Rose” has just the right low pressure of atmosphere warming and fogging up underneath the notes. And though Bachmann’s voice is still relatively trimmed back and his phrasing’s maybe lost beneath one too many sheets of softness, the extra strain of the added female vocals more than compensates. The contrast between his voice, her voice, the deep synths and the lower xylophone chimes….it just really works with this really choice cover. Like the Reservoir Songs I cover of “Sunday Morning Coming Down,” it’s the right kinda song, the right kinda tone and felled-dude, addiction-driven content for Bachmann to take in his hands and throat and work serious magic with.

With this pent-up optimism incurred from “Black Rose,” it turns around nicely into the final track. For a bit, the dynamic pulls and dives of his voice work with these lyrics in a way it could have been a song he wrote himself. But it isn’t. And as much as we all love a new interpretation of the Kinks “Strangers,” it really is more of a straight-up cover and less a Bachmann re-imagining. It’s not a negative thing: it just sounds like Crooked Fingers singing “Strangers,” using the instruments leftover from the previous tracks.

Crooked Fingers don’t need many elements, and they certainly don’t need an absence of elements to give our hearts a good pummeling either. But, for me at least, Bachmann does need his own parched-ass voice to wrestle or drunkenly slump down so low and forlorn-like in his throat to drive the brunt force of his songs (or other people’s songs) into my chest cavity. In Reservoir Songs II, there’s just nothing wringing him totally out. There’s no sad sag, no abandoned bones, no lurching edges, none of those low, low condemned drops of voice. Those hard vowels and ground-out, given-up choruses. Essentially, it doesn’t sound like he’s laying on the floor, setting himself on fire, and waiting to burn down to ash and nothing.

I did my best, putting my head to the chest of this EP, my two fingers to the artery; but for as much as I genuinely enjoy “Shelly’s Winter Love” and “Black Rose” I just can’t find that presence of forsaken pulse and that undercurrent of torn-up heartthrobs I look for in the best of Crooked Fingers, covers or otherwise. To take for a moment Bachmann’s optimistic tone: hopefully this is just a brief and cozy naptime to restore our hearts before the next round of beatings, however sparse or clamorous they happen to be. Because I can take or leave the clangs, the clamor, or even the sparsity itself—hell, break out the vuvuzelas, dude—but that raw, burning Eric Bachmann phrasing…that much I really, actually need in order to feel like I’m listening to Crooked fucking Fingers.