1. Blueteeth
2. Swinging the Lantern
3. The Minutes
4. Things Luminous
5. The Let Down 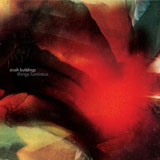 I once told Crush Buildings singer James Romanuk that I thought there was an imperceptible line between those bands finding their footing and those bands whose experience—performing live, recording with one another, listening to music with an incisive ear—has provided some robust balance of confident virtuosity and scoped songwriting. This conversation occurred somewhere between the band’s first release, a tentative, quasi-rap EP that Crush Buildings now seem to all but flat-out deny actually exists, and Surrender Sleep (2008), a long-gestating, self-released album put through all of the agonizing paces familiar to anyone who’s tried to put their stamp on the world with their art.

In the years that followed I realized that there was yet another line, beyond the first. The first line is crossed when the musician ceases to see performing music as an inherently unnatural and absurd activity, begins to inhabit the communal spaces that form when you share music with a skeptical crowd. The second is crossed when you’re any good at it. The distance between these lines is vast and, for most, uncrossable. And what was my initial perception—that Crush Buildings had crossed, nay, transcended, the first line—gave way gradually to realization that it was in fact both. Both of the lines that stand between the amateurs of which most of our city scenes are made up (and of which I have always remained a part) and those with pro-caliber vision and abilities. Those musicians who have a truly great record somewhere inside them, even if we have yet to see it.

Surrender Sleep wasn’t that record, though it was good, even great in places (“Glowed,” which you can hear on CMG’s 35th podcast, remains a gem), but it was released in a city whose anemic music scene all but strangles the life from artists and listeners alike, released without distribution to much apathy and little response and with no means to support it live. It languished in the “Local” section of the great and now tellingly defunct record store Sounds Unlikely, sitting preciously along with the other handmade cases for great bands like Relief Maps and Touching Earth Made of Steel and J’Envoie and My Dad Vs. Yours, and with that store’s death a record whose conception and growth over years made a imperceptibly tiny splash into the disinterested ocean of listeners who need do little more than type a band’s name and “Mediafire” into Google to instantly attain what they’re looking for. I was learning a lot about how to listen to music by tracking the attendant struggles of a friend’s good band to receive a modicum of recognition.

It’s not like I’m getting pissed off that the crumbling music industry makes it hard for a band I like to do more than give their music away for free and hope that, somewhere, there’s a person who allows it, even in only a passing way, to affect them. I mean, there are people losing their jobs here. But there’s something interesting and valuable to be learned from tracking the crawl of a band, a band just like any of the number of unsuccessful bands of which I’ve been a part, from basement to stage and back. To see how the music they produce seems to manifest from these weird, nebulous stages of a broken industry’s slow death. Is music simply relegated to those brief consumer impulses capitalized upon while we surf the web on our smart phones, like animated mini-games and Viagra spam? Are musicians all essentially just buskers at this point? During this year’s massive corporate cluster-fuck—the $300-for-a-festival-pass, Andrew-Bird-alongside-Supertramp Cisco Systems Ottawa Bluesfest—a group of eight year old boys played classic rock covers outside the main gate. The crowds that gathered around them, a dozen deep, were larger than any audience I’ve seen at a Crush Buildings show. Or any show at which I’ve performed for that matter. Those kids made the front page of the paper.

Which is to say: how is it that Things Luminous even came to exist? What could possibly be the motivation to run, full-speed and face-first, into the outstretched fist of this pitiless scene? The music here sounds very much like a band less cynical than wizened to the notion of music’s particular challenges, like a band who no longer feel the pressure to render, with one masterful swoop, their indelible impression. What it is—simply, appealingly—is twenty odd minutes of good music, a hybridized electro-rock/pop centered by another of those gems in “The Minutes” that, like “Glowed,” is smack-palm-to-forehead obviously pretty great, all free-flowing and stylish and effortless. What Things Luminous is is almost playful with its textures where Surrender Sleep could sometimes feel like it had the weight of the world on its shoulders. What I mean to say is that this, their third release, is the band’s real coming-put party, the perfect introduction to what they are capable of—that fully formed and felt sense of the world in which they’re writing, that statement that you can go ahead and keep knocking them down but they’re going to keep at it. It’s sincere and melodious, and occasionally—as with “The Let Down” and the title track—very beautiful. And it’s wholly unpretentious about itself, fully aware of the callous shit this making music thing turns out to be.

I walked into the release party at one of the only bars left in the city—a shitty place where bands are treated like garbage and paid practically nothing—and Crush Buildings were selling copies of Things Luminous for $5, which, for anyone even preliminarily involved in the economics of pressing records knows, is about as low as a CD can be sold without ostensibly resorting to carefully and meticulously feeding your money, one bill at a time, into a paper shredder. Someone was standing at the table, visibly torn between spending their money on the new EP of the band that they were there to see, the EP that said band had just labored over and released despite the phenomenal lethargy in response to their ambitious full length, and buying a pint of beer. James just gave him a CD for free and shrugged. The group’s new record, by all accountable and respected metrics other than those that actually matter, was established as wholly worthless; what is there left to do but find art in that one undeniable gesture of going on?