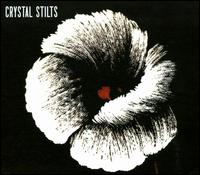 As if birthed with destiny apparent, New York’s Crystal Stilts have released Alight Of Night, a debut staunchly in debt to the locus of their ascent, mostly tarred with lo-fi blur, hemmed by reverb and dour guitars. It’s a perfect indie rock record of our time, pitted between so many wonderfully visceral moments and similarly as many contrivances that it doesn’t have to account for its place in any broader niche spectrum, though maybe it should, and instead finds a safe ballast by focusing more on gesture than statement. In other words, they play their parts well: their tone and complexion can be horrid; the rhythm section of (former Vivian Girls) drummer Frankie Rose and bassist Andy Adler can be astounding; singer Brad Hargett’s voice can be draped over every muscle like a dirty washcloth, indiscernible for the benefit of absorbing swarthier filth. It’s a vigorous, seamless amalgam of garage-, post-, and pro-rock tropes, but there, in the thick of things, it’s easy to forget that little light can actually penetrate the record’s surface, that there never arises any reason to question the band’s methods of obfuscation or wonder about how often they resort to organ or harmonica fills. There’s no incision; no place to claw at to get deeper inside.

This makes for a workmanlike listen. For all the frills of doom and cadences of industry firing on all greasy pistons, the dynamics at hand are simple, rounded up summarily when the album presents its glaring contradictions as a matter of fact: like when, a minute into “Shattered Shine,” a harmonica is able to coax a wall of lovely noise out from the stubborn core of the song and finally open the album but then, soon after, the band returns to pointing the mix straight down the center like a drill, whirring, aimed right at the center of the forehead.

The approach makes sense; like the Velvet Underground or Jesus and Mary Chain, they never sound voluptuous, just loaded and immediate; like the laundry list of other bands currently exploring similar throwback garage hybrids, they seek purity in shadows and white noise. It’s fascinating to consider how a trendy sound of thin, needling, noisy music can inspire a listener’s imagination more than deep, even overwhelming studio potions. But what no one’s ever bothered to ask is if any of this is any fun—they just push forward, dedicated, and find that aimless tenacity equals vague genre allegiances equals a decent reason to press on, tenaciously. Away from this cycle it becomes some agnostic sin to seek a purpose behind the production—I mean, is No Age ever asked if they think we’re having a good time listening to vocals that flat? But back in the cycle, that question doesn’t make any sense, because by simply becoming involved in a No Age show a listener admits all tautological debate as moot.

It seems to me that Alight Of Night is so enamored with a listener’s effort to try to like it that it becomes about trying to like it. Bliss can permeate with effort, as in the final forty seconds of “Departure” where Hargett thankfully steps aside and the organ’s ring carries itself through the struggling mania of guitar and snare, or when “Spiral Transit” practically shrinks into itself, the womb signified by a curling wisp of synth. But for all the gloomy set-pieces and muscular omens, the album never really challenges anything, dwelling unequally between action and reaction, or, more appropriately, between work and reward. It’s content in what it does, and, in a funny sort of way, damn self-satisfied. In taking a piss on that old Yoda-ian adage, asserting that doing and trying can be the same thing, Crystal Stilts do away with any implied tension, anxiety, or existential dread. Those feelings are left to a uniformly beleaguered production aesthetic, and all that mostly does is sterilize loftier aspirations and ground broader artistic personality.

Alight Of Night, then, is surprisingly cute with its conservatism, a lot of believe in yourself conceits about achieving and creative accomplishment instead of the cold reality it proposes at first listen. Whether the lyrics attest to that is anyone’s guess, but the very plodding pall of the music confesses enough to demonstrate that, of course, these guys are trying really hard. In that, paradoxically, is the album’s success. This is mostly because the band can’t offer much new to the sounds and forebears they so emulate. Crystal Stilts have crafted an enterprise confident with the aura of decision, raring to go throughout. When they finally make that decision, whatever it is (oh, but it’s there!), take a breath and shed some of the anvil-heavy motif that smashes a lot of potential, then maybe all that exertion will actually be something of a joy to get through.