1. The World The People Together (Come On)
2. Mission Control
3. Welcome To The Third World
4. Wasp In The Lotus
5. And Then I Dreamt Of Yes
6. Talk Radio
7. Love Song
8. Now You Love Me
9. Mis Amigos
10. The Legend of The Last of The Outlaw Truckers AKA The Ballad of Sheriff Shorty
11. Beast of All Saints
12. Valerie Yum
13. Musee D’Nougat 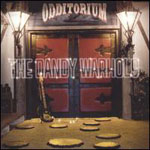 The Dandy Warhols: Odditorium or the Warlods from Mars 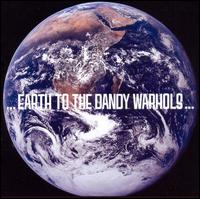 Drugs, man. And some deep shit to think about in life. Dig it, you down to tear this scene to the bones? Whoa. Wahhhhhhooooohhhhh. Yeah, it’s always been easy to caricature the Dandy Warhols as those cool druggie kids from high school who used to snort coke and passively talk about Nietzsche and the end of the world, eyes fluttering between wide-open stares of spiritual enlightenment and half-lidded stares of “Shit, really man? Fuuuuuck. Gimme some more blow.” Unfortunately for the Dandy Warhols, it’s still easy to characterize them this way, but on …Earth To The Dandy Warhols…, their sixth (or seventh if you count the jettisoned and bootlegged Black Album) release, focusing on such coke-booger stereotypes would be a mistake. There’s still some choice psychedelic slacker grooves here.

Yes: slacker grooves. Let’s start with the misfire that is “The World The People Together (Come On),” the first track on Earth, and its first single. A mostly instrumental bit of “alright kids let’s go!” riffing, the track reaches for the sugary pop celebration that was “The Dandy Warhols’ TV Theme Song,” another ba-ba-ba ditty in the Dandys’ oeuvre and another single from their first (and best) album. The key difference here is that, while “TV Theme Song” sounded like a peppy bunch of boho 20-somethings effortlessly bringing out the good times, “The World” sounds distant and tired. In fact, most of Earth sounds pretty far away, with layers of nuanced vocal effects making it sound like Courtney Taylor is on autopilot much of the time.

This isn’t neccessarily a bad thing: for much of the anything-goes whooshy party that is Earth, it fits in naturally. There’s some neat diversions from the reverb-bathed drool odysseys, such as “Welcome To The Third World,” a surreal disco-pop gem reminiscent of the Happy Mondays. Taylor isn’t quite the looney tunes attention-getter that Sean Ryder is, but lines like “You dance pretty good for a / Almost white girl,” delivered by the cripplingly bohemian protagonist, pack a funny punch in an era when the hipsters who once followed the Dandy Warhols are now dedicated to keffiyehs and white dudes ripping on Ethiopiques. Meanwhile, “Wasp In The Lotus” revisits the odd harmonics that have marked the best Dandys moments. Once again, layers of vocal effects prevent any of the lyrics from really coming through clearly, but this is the kind of echoing, gooey shoegaze sludge that first made a name for these four squirrelish ruffians. “Beast of All Saints” approaches slowcore levels of opiate instrumental crawling, and, like much of Earth, it’s not going to grab you out of your seat, but put this on in the come down phase of a party and you’ve got a great little cerebral soundtrack.

No review of a Dandys release post-2003 would be complete without mentioning DiG!, the fantastic documentary from Ondi Timoner, in which she followed the simultaneous (and diametrically opposed) career arcs of the Dandy Warhols getting famous while their friends-come-rivals The Brian Jonestown Massacre toiled in obscurity. Ironically, it was BJM’s Anton Newcombe who raised a big stink about his portrayal in the film, claiming that Timoner manufactured an image of him as an unstable junkie, completely ignoring that DiG! also portrayed him as a genius. Courtney Taylor, on the other hand, was the less-talented younger brother to Newcombe, but with business savvy and a recreational, not debilitating, drug habit. DiG! has irreparably sullied the image of Taylor and co. as legitimate, for whatever that’s worth; it’s not surprising that 2005’s Odditorium or Warlords of Mars, the first full-length release from the Dandys after the film’s release, earned abysmal reviews and a whirl of accusations that Taylor was a poor man’s Newcombe. Now it’s happening again with Earth, and while the album is far from perfect, it’s stupid to punish the Dandys for wanting to make a living out of this.

In the end, Earth is confused, from its sound to its near-indecipherable lyrics to Taylor’s vocals shifting octaves. Having moved from Capitol to their own Beat The World label, the Dandy Warhols are trying to forge a niche for themselves in this brave new world, where the indie/mainstream balance beam they started walking in 1997 has become the standard. It’d be nice to hear something a little more rousing (album closer “Musee D’Nougat” drags on a sleeping synth-string progression for 14 unnecessary minutes), but like its vastly underrated predecessor, Earth is worth getting to know.